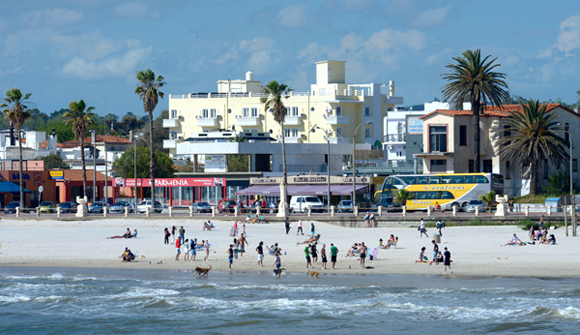 An American who retired to Uruguay talks about why he moved to Piriapolis. He offers incredible insight into culture shock, how the challenges of living in Uruguay gradually wore on him and what he appreciated about the culture in Uruguay.

No. I retired before moving to Uruguay.

My wife was fairly fluent in Spanish when we arrived. I learned some while we lived there, but my Spanish was poor and it hindered my integration with the culture.

Not really. The experience was so far out of my realm of experience I really didn't know what to expect. My only experience in another country, beside a bit of time in Canada, was a day trip from San Diego into Mexico. I basically just jumped in.

My mind didn't know how to project into the future. I noticed the gears of my mind turning as if it had a grasp on things, but another part of me knew I really had no accurate map of the territory I was in. I was really in a new culture, I really didn't know how things worked, and it was difficult to adjust to this after living a life of familiar routines.

Yes. There was definitely a honeymoon phase. Uruguay seemed so ripe with freedom, with wide-open possibilities, with beauty. Being on the beaches there, hanging out with ex-pats, exploring--it was all so thrilling at first. And disconcerting also, but mostly it was a blast. After a winter there, the dampness, constant cold, having to make a fire to keep barely warm, and the grim undertones of life in Uruguay began to appear. I never experienced anger, because I was there by choice, and I could leave (which I did after nearly three years). At the end of my stay, I was disillusioned. I was very tired of the hardships. Water there is polluted with glyphosates, the infrastructure is run down, good restaurants are limited. The ex-pat community, once vibrant and cohesive, experienced a lot of rifts and many people left..

I moved to Uruguay within three weeks of retiring. I had no experience living in a foreign country. I did this partly because I was ready for a hard reset. I wanted an experience that would jolt me out of my mental patterns and force me to see the world anew. I wanted transformation, even though I knew it would be difficult and could possibly even lead to mental breakdown. This orientation allowed me to embrace the unknown and to view the journey as a necessary stripping away of tired old perspectives and small-mindedness. Being in an entirely new culture required radical acceptance, curiosity, and humbleness. Changes in my included learning: to ask others for help; learning that living with integrity and honesty is a survival skill in a small community--you actually need other people; learning that uncertainty is how life really is; and learning that I can control to a great extent how I care for my body, how I tend to my emotions, how I surrender and open myself to life, and how I relate to others. I cannot control other people, places, or things all that much--if at all.

People in Uruguay in general are happier than in the USA. There's more honest joy and simple pleasures. There's a heart-level acceptance, in general, among people. There are no homeless camps. No beggars on the beaches. People live simply, but there's a sense that people matter and they're basic needs will be taken care of. I also learned to related differently to animals. Horses grazing by the road, dogs accompanying you to the beach, an occasional goat in a yard are all common.

Bad housing and poor construction standards. Things like plumbing and electricity are often shoddy and dangerous. Floors are usually cement slabs, and most do not have proper vapor barriers so moisture and mold is a constant problem. Fly screens, like in many countries, are rare so houses are filled with mosquitoes and flies and bugs. Driving is dangerous--motorcycles speed along the shoulder of roads and between traffic. Roadways are poorly designed. Cars pull out onto the main highway from gravel roads along the side.

We were going through the process to obtain residency cards. This is fraught with confusion and contradictions. In a local office, a woman in authority in the immigration office told us a document had to be resubmitted, in contradiction to what we had been told. My wife made the mistake of correcting her and she got very angry. We had to call in the help of someone fluent in Spanish who had lived in Uruguay for many years. The cultural faux pas was that the woman could not be wrong, because if she were wrong she could get in trouble. So she had to be "right" even if she was actually wrong. A token correction had to be made to appease her. There are deep cultural differences when it comes to assertiveness and conflict and especially "customer service."

Culture shock exists, and becomes a problem, when the way things used to be are held up as a standard and the new culture is constantly compared with the old. Holding on to how things "should" be will alienate others and cause enormous suffering. Honoring and accepting ambiguity, letting go of the need to be completly self-sufficient, and learning to ask for help leads, ultimately, to trusting that life will provide the people and resources and things we need.. This is transformational, and in the end makes us better people.

An Expat Talks about Moving to Punta Del Este, Uruguay

An expat in Uruguay talks about moving to the beautiful resort town of Punta Del Este. She talks about housing prices, what to bring and leave behind and more.

Expats in Uruguay: Pros and Cons of Living in Uruguay

Many expats who consider living in Uruguay have lived in other South American countries, and then they are exposed to stories of all that it has to offer.

5 Important Tips about Healthcare for Expats in Uruguay

Expats in Uruguay have a variety of healthcare options available to them. Understanding what is available is an important part of preparing to move there. Information about proximity of care and prescription medications in Uruguay is also provided.

We've only lived here 2-1/2 years, and feel that this is a well written representation of life in Uy. I particularly agree with the level of inhabitant happiness, though the average bloke has little when compared to "Americans". In California everyone is so consumed with consuming that they have lost sight of the simple pleasures that make life rich. I would add that the road system is being radically improved. For example ruta 60, was a very long series of horrible potholes, and we laughed that our local dirt road was far better, has been completely repaved, striped, guard rails added etc. I am learning to live "tranqui" and not to drive like an Argentine who needs to get to Punta del Este yesterday!

Get a quote for expat health insurance in Uruguay from our partner, Cigna Global Health.
Get a Quote

Expats in Uruguay: Pros and Cons of Living in Uruguay

Many expats who consider living in Uruguay have lived in other South American countries, and then they are exposed to stories of all that it has to offer.

Many expats who consider living in Uruguay have lived in other South American countries, and then they are exposed to stories of all that it has to offer....

5 Important Tips about Healthcare for Expats in Uruguay

Expats in Uruguay have a variety of healthcare options available to them. Understanding what is available is an important part of preparing to move there. Information about proximity of care and prescription medications in Uruguay is also provided.

Expats in Uruguay have a variety of healthcare options available to them. Understanding what is available is an important part of preparing to move there. Information about proximity of care and pre...

An Expat Talks about Moving to Punta Del Este, Uruguay

An expat in Uruguay talks about moving to the beautiful resort town of Punta Del Este. She talks about housing prices, what to bring and leave behind and more.

An expat in Uruguay talks about moving to the beautiful resort town of Punta Del Este. She talks about housing prices, what to bring and leave behind and more....
Uruguay Guide