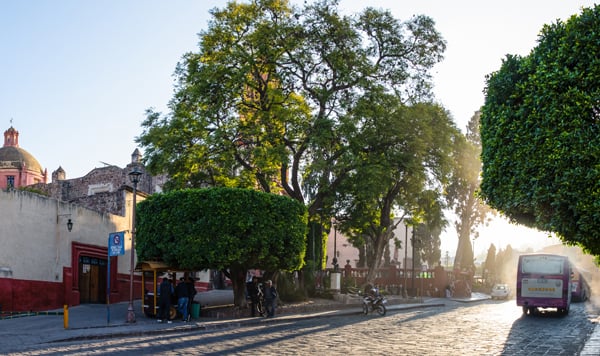 Contribute
Help other expats and newcomers by answering questions about the challenges and adventures of living in San Miguel de Allende.

Expats offer advice about everything you need to know before moving to San Miguel de Allende: what to bring (and what to leave behind), how to find housing and more.

Take off your rose-colored glasses and learn what expats and digital nomads have to say about the pros and cons of living in San Miguel de Allende, Mexico.

2022 Guide to Living in Mexico

Expats, digital nomads and retirees talk more about what it's like to live in Mexico and offer advice to newcomers..

Pros and Cons of Living in Mexico 2022

Members discuss the pros and cons of living in Mexico.

2022 Guide to Moving to Mexico

What is it like to move to Mexico in 2022? Members offer advice for newcomers.

Members Talk about the Cost of Living in Mexico

Expats, digital nomads and retirees discuss the cost of living in Mexico.

Guide to Real Estate in Mexico

Advice for people renting and buying real estate in Mexico.

Several things to keep in mind when considering a move here: the crime statistics have been steadily rising. The July 15th issue of the San Miguel de Allende Atencion newspaper printed the crime statistics for our town during the 5 month period ending May 2016. This includes 23 homicides, 17 rapes, 215 street robberies, 59 house robberies, 23 other sexual crimes, 41 car thefts & 49 business robberies. There is a website on Facebook called More Security in San Miguel which posts ongoing statistics on crimes being committed. For example on Mon., July 18 there was yet another shooting near Col. San Felipe on the Libramiento Manuel Zavala which they posted. For such a small town of less than 140K it is of great concern. The 95 assassinations in August for the state of Guanajuato was the highest of any month this year according to the National Public Security System. Most of the murders have been linked to the activities of organized crime in the Bajío state. Some of Guanajuato’s homicide victims have included high-ranking officials belonging to the municipal police of the city of Celaya, where our local CostCo and Home Depot are located, including Commander Marco Antonio Murillo Gómez, who was executed August 8 while eating breakfast inside the city’s El Dorado market. Three days later, police officer Césarea Saavedra Jiménez was killed after her vehicle was ambushed by sicarios, or hired assassins. Many residents do not wish for these statistics to be known. However, large numbers are leaving as this is occurring much too close to home.

Hi, I actually already live in San Miguel de Allende, GTO, Mx. I have a casita I rent and the tenant seems to think, based on your cost of living numbers, that he is being over charged for gas. I wonder if you have kept up with the moving cost of gas recently, and if you would want to make a correction if one is appropriate? I would love to show him any updated information, as gas here has skyrocketed over the years. I don't know if the cost is the same everywhere in Mexico. We have about 3.5 months when we use our gas heaters to stay comfortable. The rest of the year we don't need a heater, but our cooking and clothes dryers are used year round. Thanks for any updates! Livesinmexico

Contribute
Help other expats and newcomers by answering questions about the challenges and adventures of living in San Miguel de Allende.