8 Expats Talk About What It's Like Living in Morocco 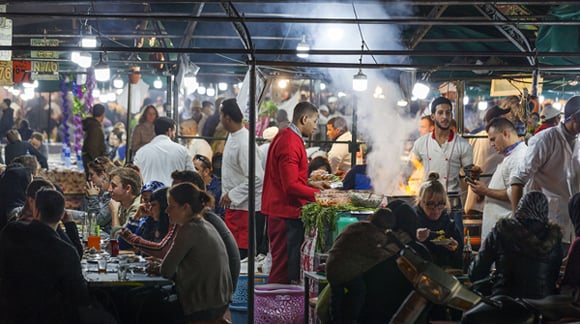 Expats talk about adapting to the Moroccan culture, restrictions for women living in smaller cities, cultural blunders and more.

What Expats Appreciate About Moroccan Culture

"Moroccans are warm and extremely hospitable. There are poor, poor people and if you have $10 in your pocket, it's $10 more than they have and many times they are hungry. Please try to understand many people are desperate just to feed their family or to buy a tank of gas to heat their home for a very cold night. As Americans, almost none among us can imagine the challenges that face some of the most brilliant and loving people on earth," said one expat in Morocco.

"I appreciate so much the way Moroccans have a strong social network of family and friends to help each other and support each other in a multitude of ways. I appreciate observing in my Amazigh family relationships that even when there are squabbles, they pull together again and help each other when its needed. I appreciate greatly the "TRUE GENEROSITY" of sharing themselves and materially with others. I also enjoy the way the men in our family help their wives, mothers, grandmas, etc., with the chores of daily life," said one expat living in Khemisset, Morocco.

The Most Challenging Aspects of Living in Morocco

Depending upon where you live in Morocco, expats will find different challenges. "Being a woman alone in Morocco should not pose a problem. I am a while, fair haired woman frequently travelling alone in many parts of Morocco. Alhamdolilleh until now have never had a problem. But I put it down to dressing modestly, I don't wear much make up and very little jewellery. People are friendly and want to talk. If men make a call I smile and say good morning but carry on with my business. I will stop to chat with storekeepers and women," commented one expat living in Rabat.

"One new challenge was adapting from American culture where women can easily go most anywhere unaccompanied without a thought about it. And, no one sees that as strange. But, in a smaller city such as Khemisset, women travel in family groups with other female relatives, or with male relatives, or with their children and its not common for a woman to walk the streets, or travel by oneself. In my family, most of the daily shopping for food, etc., is done by men. It actually takes a lot of the burden of running the household off the women," said one expat living in Khemisset, Morocco.

"Thieves, trash everywhere and the outdoor urinal. Getting used to the economy," mentioned another expat in Morocco. 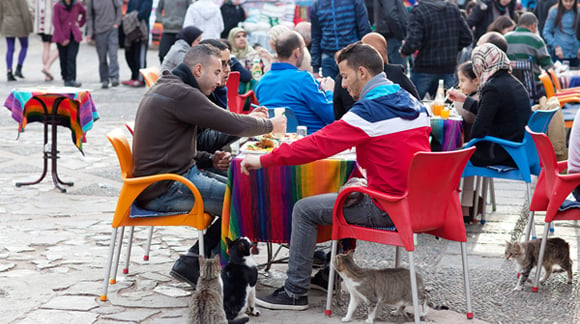 When we asked expats about cultural blunders they've experienced in Morocco, they replied:

"Yes. I learned quickly that my habit of ambidexterity and using both hands to do things needed retraining to break that habit. Its not good to reach for food with your left hand.. Oh my gosh. Thats a huge social blunder. And, so much hugging between members of the same sex, holding hands etc., which really I never was a hugger back in the USA. I also needed to learn no shaking hands with men," said one expat living in Khemisset, Morocco.

"I love my new family they truly are so patient in my attempt to learn arabic. I am not allowed to say a few words in arabic since I cannot seem to hear or repeat what is being said. So much so that it is now the family joke. The words are not in any book stating to be carefull. zip as in: to zip around a corner. This essentially is a man unzipping his pants as explained to me. Careful saying coffee in arabic. Said wrong you are asking someone if they would like a cup of sperm. Husband said wrong in arabic means thief. And there were a few other funnies, bless them all for making light of the learning moments. I will say the whole family agreed after numerous attempts of trying to say coffee in arabic I am now to just say "coffee"," mentioned another expat in Morocco.

We asked expats about diversity in Morocco and whether locals are accepting of differences. They said:

"As a black American I have never disrespected but I know no one outside of my wife. I do not speak either Arabic or French so I'm unable to have any conversations with anyone outside of my wife. I have not seen any other American living in Al Hocemia. But I'm still hoping to meet other people and hopefully some Americans," said one expat living in Al Hocemia , Morocco.

Advice for Newcomers to Morocco

"Just try to keep yourself busy and occupied and understand its normal to go through an adjustment period, Read about the emotions you may experience while you go through culture shock and know it will get better with time and that it happens to everyone. Also, don't expect your experience to be "textbook" or exactly the same chronologically as others have described. I think one stage that may not be mentioned often is just feeling "numb" or like you are in shock. Just try to go with the flow, have an open mind, and don't freak out over the negative aspects of your new culture. Try to put it in perspective and imagine yourself as a stranger seeing some of the not so great aspects of American culture for the first time, and maybe that will help you get through your own adaption process," said one expat living in Khemisset, Morocco.

"If you have never traveled to another country you need to find a group of people who live in the area who have already gone thru the culture shock. If you are used to travel just remember that you can still experience culture shock and the emotions associated," mentioned another expat in Morocco.

An expat in Al Hocemia briefly discusses his difficulty in connecting with other expats in this city on the coast of the Mediterranean Sea.

Get a quote for expat health insurance in Morocco from our partner, Cigna Global Health.
Get a Quote

10 Tips for Living in Morocco

Despite the Turkish toilets, high cost of living and language barrier, expats in Morocco agree that they love living in Morocco. Members share advice for living in and moving to Morocco.

Despite the Turkish toilets, high cost of living and language barrier, expats in Morocco agree that they love living in Morocco. Members share advice for living in and moving to Morocco....

What are the best hospitals in Morocco? Is Moroccan healthcare free? Should I buy expat health insurance? Are my medications available in Morocco? Answers to these and more questions that expats l...

Is it difficult to immigrate to Morocco? How do I get residency? What should I bring when moving to Morocco? What is the quality of healthcare in Morocco? Answers to these and other questions for ...

An Expat Shares What it's Like Retiring in Rabat, Morocco

An expat retiree offers some amazing advice for living in Rabat, Morocco. However, there is some sage advice offered for expats regardless of how old you are or where you want to live.

An expat retiree offers some amazing advice for living in Rabat, Morocco. However, there is some sage advice offered for expats regardless of how old you are or where you want to live....
Morocco Guide