Summary: Expats in the UAE talk about the country's incredible diversity, friendly people and family-oriented culture. Some of the downsides of life in the UAE - the heat and fact that platonic relationships between men and women are non existant. 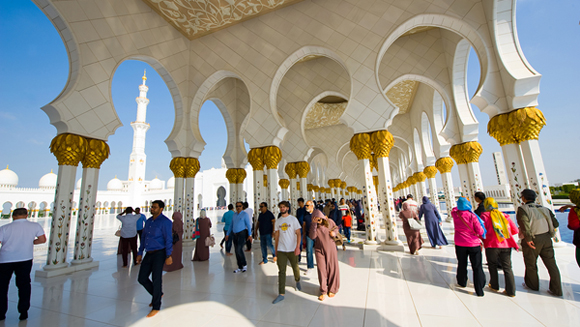 Despite most newcomers' preconceived notions about the UAE, expats resoundingly agree that the UAE is one of the most diverse places in the world. That fact coupled with the friendly, family-loving culture make the UAE a great expat destination (if you can take the heat!)

The UAE is Incredibly Diverse

We asked expats about diversity in UAE and whether locals are accepting of differences. They said:

"75% of the populations are of expat, Asian/ subcontinent. People lives in harmony and the city are considerably safer than any other cosmopolitan city in the world. Although UAE is a muslim country, alcohol are served in licenced restaurants/hotels to non muslims. An alcohol permit could be applied through various alcohol stores (MMI or African eastern) - to be issued by Dubai Police upon approval - which allows you to purchase alcohol from the stores. UAE is also a tax free country," explained an expat living in Dubai, UAE.

"There is definitely a lot of diversity. The universities, private schools (K-12), and hospitals are one reason for a lot of diversity and a lot of Westerners in Al Ain. A lot of Arabic and East-Asian nationalities are employed in Al Ain. However, there is an over abundance of men, living far from their families, often milling around down town Al Ain on their day off from work. The country as a whole is tolerant of the diversity and Western Ways (to a limit). Women should be sensitive to the imbalance of the genders, and all should be respectful of the local culture and customs," commented another expat living in Al Ain, UAE.

"This is an extremely tolerant islamic country. All religions are tolerated although not promoted. There are more races, countries and ways of life than I have fingers, toes, legs and arms of counting. Everyone can do their own thing and it is accepted. My friends and aquaintances are British, Canadian, South African, Emirati, Yemeni, Australian, Indian, Pakistani, Jordanian, Palestinian. I think that we are diverse and accepting of differences," said an expat in Abu Dhabi.

"Al Ain is much more traditional than Dubai or Abu Dhabi - so you will see more of true Emirati culture. The Emirati are a very closed culture and men and women do not generally socialise together. if you can make a few Emirati friends and be invited into the inner sanctum you will be very welcomed and valued, however it is not easy to do that. Most of the population in the Emirates is Indian - over 50% and the Emirati are a very small percentage (maybe 12-15%) so it is very multicultural here. Islam is the main religion and permeates all aspects of life here - and it is very peaceful and non-threatening," wrote another expat living in Al Ain.

"This is the most diverse city on the planet, along with Dubai. Everyone, and I mean virtually EVERYONE is from somewhere else. Religions and cultures all intermingle peacefully and it's not a big deal to have a Buddhist, a Hindu, a Christian and a Muslim in a group of friends. They all get along just fine. Differences are what make this country the experience it is. Perhaps that's why as many as 60% of American expats who repatriate back to their home country encounter difficulty reassimilating and most find themselves coming back to the UAE for more of that openness," remarked an expat living in Abu Dhabi.

"Very diverse and very tolerant. However, there is not to much mixing among the three major groups, local citizens, western expats and expats from developing countries," said one expat in Abu Dhabi.

Moving to UAE soon? AGS Worldwide Movers is a leader in the international moving industry. Their experience and expertise allows them to guarantee their clients the best quality moving services. Get a Moving Quote

Moving to UAE soon? AGS Worldwide Movers is a leader in the international moving industry. Their experience and expertise allows them to guarantee their clients the best quality moving services. Get a moving quote today.

We asked expats in UAE what they appreciated about their new culture. Here's what they had to say:

"In all 3 countries we've lived (UAE, Azerbaijan, & Egypt) teenagers seem to have a much better relationship with their parents. The less people have the more generous they seem to be. Slower pace, more balanced life in Azerbaijan and Egypt. Appreciation of the arts in Azerbaijan," noted an expat living in Dubai, UAE.

"The friendliness of the Emirati people. I have been made more welcome in the UAE that in several parts of the UK I have visited," remarked an expat in Abu Dhabi.

"They're incredibly generous. If I admire something of they own, they will try to give it to me. They are also highly hospitable," said one expat in Abu Dhabi.

"The warmth and care they show their families, especially their children, is truly heartfelt. Americans could learn a lot by watching the time the Emiratis devote to family," explained one expat.

"Sun, Sea, Camping in the desert at the weekends, BBQ's with friends, eating out, free ladies night in the hotel's, the perfect weather and climate from Nov through to May," said one expat living in Dubai, UAE.

The Most Challenging Aspects of Living in the UAE

Then, we asked expats in UAE what was most challenging about their new culture. They replied:

"If you live in Abu Dhabi you may find yourself living 45 mins plus outside the city as the only cheap accomadtion in AD is out near the airport Al Raha is slowly after 2 years only now becoming easier place to live with it now being on a bus route, and new supermarket's opening, AlReef still has very little out by the compounds in the way of taxis and shops Meeting new friends who are likeminded," an expat living in Dubai remarked.

"The Emirati population is small compared to the rest of the country, so there are generally less of them around. As a woman, forming friendships w/ an Emirati man can be tricky. The concept of the platonic male/female relationship doesn't exist in their culture. On the flip side, the women tend to have a lot of familial obligations and, at times, limited ability to move freely without a male member of her family, so going out to a restaurant or coffee w/ just the girls has never actually happened for me," another expat in Abu Dhabi reported.

"This one specifically has a very different view of females and males. Was not use to a man thinking I'm interested in him only because I smiled a polite acknowledgment type of smile. Also, giving up rights as a woman to husband is very foreign," said an expat living in Dubai, UAE.

"Time is just a variable here. An appointment really is not as specific as we expect, especially between friends," explained an expat in Abu Dhabi.

"The heat - by far the heat. And there is dust on everything especially after even the smallest dust storm. My deck off my apartment is like a beach most of the time," commented one expat living in Dubai, UAE.

"Moving to a middle eastern country is so different to other European countries, the greatest challenge is understanding how and why things happen in the workplace. One expects differences in food and the day to day shopping, bargaining etc. Working in Government I was and still am to a degree, challenged by the completely different way of internal working when compared to the UK. The language is a barrier, but it is also the unwritten codes of the tribes and families, the office politics etc which pervade every thing, every day," wrote one expat living in Abu Dhabi, UAE.

10 Tips for Living in Abu Dhabi

Expats in Abu Dhabi enjoy a unique lifestyle in the Middle East, but the requirements for moving there are very specific. Find out what these are and what it is like to live in this truly diverse city.

5 Tips for Living in Dubai

Expats in Dubai will find one of the largest expat hubs in the world. With so many other people from other cultures, it's a location where just about anyone can find a comfort zone with the right frame of mind and amount of effort.

7 Important Tips about Healthcare for Expats in the UAE

Get a quote for expat health insurance in UAE from our partner, Cigna Global Health.
Get a Quote