An expat offers invaluable tips about buying real estate in San Jose, Costa Rica. He advises expats to rent before you buy, wait until you have legal residency to buy, hire a lawyer (or two) and much more. It's a must read for anyone thinking about buying a home or investment property in San Jose or the surrounding suburbs. 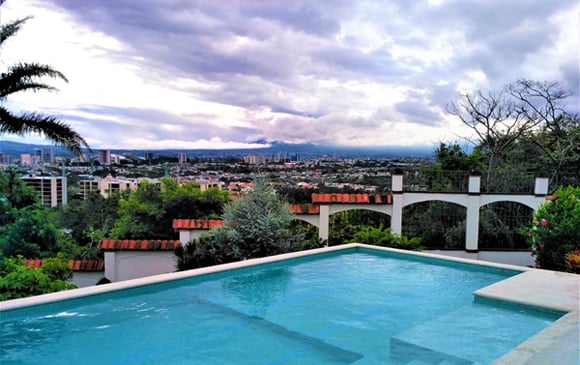 Traditionally expats bought on the west side of the San Jose metro area and concentrated in the suburbs of Escazu and Santa Ana especially. These are probably still the main areas. However, in reality expats buy almost everywhere. I live on the east side and there are at least two home-owning expats within a couple blocks of me. I also know expats who have bought in areas like Desamparados and Guadalupe, which nobody considers expat enclaves.

Best Way to Find Properties for Sale in San Jose

Many would advise going through a realtor and that's probably wisest if you don't know your way around. The native way to look though is to just walk the neighborhoods you're interested in and look for "for sale" signs. Related is to check grocery store bulletin boards. A lot of housing is still found in these traditional ways. Now the online site encuentra 24 is probably the best classified ad system and you're certain to see dozens if not 100s of listings that meet your search parameters by using it. It's like Craigslist but without the scams and a lot more people use it.

What Your Budget Will Buy You in San Jose, Costa Rica

$50,000 is about the entry-level price of a small house or apartment in a safe-enough but not great neighborhood. Double that to $100,000 and you start having a lot of better choices, although are probably still making compromises. $150,000 may be the sweet spot where you can find something that suits all your requirements and have a ton of choices, although that's probably not enough for a built-in swimming pool or a large family home in a nice neighborhood. Above $150,000 I think a person is either buying luxury or a large family home. A nice big house in my upper-middle class neighborhood is now on the market for $250,000. I assume the seller would take $200,000. But the house is too big for a single or a couple and I suspect that the buyer will be an investor who subdivides it into apartments. Of course, some people spend millions, but almost everyone else can find what they want for under $200,000--and maybe a lot under.

Expats Should Rent Before Buying a Home in Costa Rica

Don't buy. For some reason that I suspect is emotional expats almost always want to buy property, but it doesn't make a lot of sense. It's much easier and cheaper to rent. There's also the widely reported statistic that some half of the expats leave the country within the first year of arriving--and stories abound of those who bought homes taking a huge loss when they sell. There are also a fair number of problems with property theft--your house is sold out from under you without your awareness. Give yourself a few years in the country to become acquainted with the customs and the neighborhoods before you plunk down money you may regret.

The usual advice is to hire two lawyers--the second to make sure the first lawyer doesn't steal from you. Although a joke, there's more than a kernel of truth. I've used two lawyers here and can't recommend either. Neither was criminal, as far as I know, but neither was competent. But yeah, you need a lawyer in this country to blow your nose. There are also enough scams in real estate to justify a lawyer looking out for your interests even if you didn't absolutely need one.

No, foreigners can own property with the same rights as locals. However, I personally wouldn't buy until I had legal residency. Many nonresidents do buy and don't have any problems, but I'd personally want the right to live in the country before I invested money in it. Related is that absentee-ownership is asking for problems. Unless it's a condo at the beach with a rental program, I wouldn't recommend buying without living here, and I wouldn't count on living here without legal residency.

5 Best Areas of San Jose to Invest in Real Estate

Investment property? Well, since you asked:

1. I have my eye on Barrio Lujan, still a rundown neighborhood near the center of San Jose, but a lot of the other neighborhoods are gentrifying and I suspect that Barrio Lujan will too. A typical investment might be a house that can be subdivided into apartments.

2. Other in-town neighborhoods further along the gentrification path, such as Barrio Amon.

3. San Pedro. It's very close to San Jose and already a middle- to upper-middle class neighborhood, but it's also the site of the University of Costa Rica. That's a fixed property value that will anchor the area almost regardless of other economic conditions. Again, I'd look at houses that can be converted into apartments.

4. In-town Heredia. This is the site of the National University, which while much smaller than the University of Costa Rica, has similar advantages. Also, Heredia is an over-built traffic-clogged suburb, which to my mind makes focusing on the town itself wiser than some of the surrounding areas. Again I'd look at converting houses into apartments, although in Heredia a single-family home is probably doable.

5. Cartago. It's kind of the stepchild of the suburbs but much cheaper, and I suspect is going to be on the upswing. It's also the site of the technical university, which is quite good.

This you really need to turn over to a lawyer. The only advice I can offer is not to expect the process to be quick. It always seems to take at least twice as long as it should.