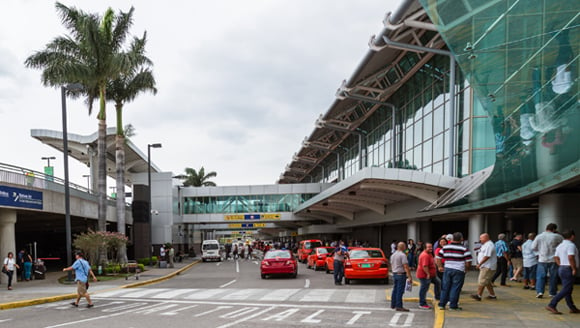 Most foreigners who voluntarily move to San Jose, Costa Rica do so for the nice climate, lower cost of living, and friendly people. Some of course move here for work, usually in the multinationals, while a few are running from someone or something (often the law).

Per capita GDP in Costa Rica is about a third as high as it is in the US, and the cost of living is commensurately lower. However, the prices of some goods are set at a global rather than a local level and the prices of others are actually higher owing to taxes and import costs.

Realistically, the cost of living is about half as high as it is in a similar location in the US, although individual tastes and circumstances vary. As for a dollar amount, some expats say $2000/month is the minimum, though I think that's high and others think that's low. I will say that the pensionado minimum of $1000/month is doable, but pretty lean.

I'm only familiar with Democrats Abroad and an expat Facebook group, although there are others (but strangely not a Republicans Abroad). It's pretty easy to hook up with these kinds of groups but they're not my focus. I "went native" and mostly socialize with Latinos.

I don't have kids in school so can't comment specifically about the various options. However, there are a lot of them. Those favored by most expats seem to be west of the city, while I live east, but there are a number of seemingly decent private schools on the east side too.

Most people shop in supermarkets similar to those the world over. Indeed, in addition to Walmart, Walmart owns two or three supermarket chains, although there are others. I have two supermarkets three blocks away and another one about six blocks away.. There are also chain office supply stores, PriceMart, chain convenience stores, McDonald's and all the rest, It's all pretty normal.

Unique are the separate fruit and vegetable stores, farmers selling fruits and vegetables out of trucks on the side of the roads, and so on. Unfortunately also unique is the dearth of large department stores, even furniture stores. Specialty shopping, so to speak, can require going to a bunch of different stores and still not finding what you're looking for..

Public transportation is a plus. Buses go everywhere, although they take some getting used to. Routes and stops are rarely clear (you often have to ask somebody) and the buses themselves aren't particularly comfortable. There is also some safety risk on the buses. Women can be groped and everybody can be robbed. However, while bus robberies make the news, I doubt there are statistically more victims than there are victims of carjackings. It also depends on the route and the time of day. I regularly ride the buses, but I'd be leery of some routes and usually take a taxi after about 10 PM.

There are taxis and now Uber, so these are options. People also develop relationships with cab drivers or their informal substitutes. Many expats own personal vehicles, but I don't and I don't believe there's any financial incentive. Even if you won't ride the buses, taxis and Uber are cheaper than owning a personal vehicle.

There is also a passenger train through the metro area that some take, but it only goes to some locations and runs during rush hours. It's never suited me to take it, but it's a good option for people who want to go where the train goes when it goes there.

The temperatures are mild enough for nobody to have heat and nobody to need air conditioning, although a few do. 55 degrees Fahrenheit would be a cold night and 85 a hot afternoon. There is though a long rainy season, starting in May and sometimes extending into December. It's usually not bad, just fairly predicable afternoon rain, but in September and October when it's really heavy almost everybody wearies of it.

There's pretty much everything. My specific neighborhood (within walking distance) has dozens of restaurants ranging from pizza joints to Japanese cuisine, though not many if any four star restaurants. I'd have to take a taxi to get to one of those. My neighborhood also has various US chain restaurants, such as Fridays and Hooters. Nearby (a short cab ride) is a "gastronomy row" of various independently-owned creative restaurants and brew pubs that have good reputations.

My neighborhood also has tons of bars, including one with live music every night and a few with occasional live music. Most of the live music is Latin, but there is jazz, blues, classic rock, and so on. Beyond my neighborhood are casinos, dance clubs, pickup bars, and so on. San Jose isn't on a par with London or New York, but it's not a backward small town either. Pretty much everything exists here.

I'm about two miles from both a public and a private hospital, but for emergencies you definitely want to go to a public hospital. The private hospitals don't necessarily have the staff onsite and want to be paid upfront. The ER room at the public hospital is a zoo (no one likes it) but once you convince the intake person that you're really sick the care is as good as anywhere in the world, just without the creature comforts. Convincing the intake personnel that you're really sick though can be a challenge. They're surrounded by people with the sniffles who really shouldn't be there. It helps to arrive by ambulance or to be bleeding or at least to have a heart attack.

Soccer is hands down the most popular recreational activity, but adults seem to prefer watching the games on TV than playing. A fair number of people are bicycling these days. Almost everybody likes going to the mountains or the beach, but these are more weekend excursions than daily activities. My neighborhood has several gyms for those who work out. People do play tennis and swim in pools, but this seems to involve finding and paying for access to the courts or the pools. Foreigners often like to play golf, and there are courses, but none near me. You have to go to the golf courses. Basically mine is an urban setting where sports-like recreational facilities aren't widely available to the general public, but people who like various sports and recreational activities find the venues. Some even take day trips to the ocean beaches--a couple are close enough--but that's ambitious. Most people would want those trips as well as those into the mountains to be overnight excursions, but they can be done in a day.

Tourist visas for the US and I believe most of Europe etc. are 90 days no real questions asked. They can also be renewed by a 3-day stay out of the country. As a result, many expats are "perpetual tourists" who just take short trips to Nicaragua or Panama every three months. This probably isn't good, and "perpetual tourists" can and sometimes are prevented from re-entering, but it works for tens of thousands of foreigners over many years.

There are three ways to obtain legal residency (in addition to through marriage). One way is to come in as a pensioner. This only requires showing a minimum of $1000 a month income for life, as well as of course dealing with a lot of paperwork and paying fees. Those who can't or prefer not to show the $1000 a month income for life can obtain residency as either rentistas or investors. Rentista residency now requires showing $2500 a month income for a shorter period of time as well as the same fees and paperwork. . I'm not sure how to obtain residency as an investor, and I believe it depends upon the kind of investment, but some people seem to get it by just buying a house valued at either $200,000 or $250,000. Of course, people need a clean criminal record too, but otherwise it's either $1000 a month guaranteed for life or a fair amount of money in a lump sum for either rentista or investor residency.

Petty crime is rampant, but violent crime rare. Costa Ricans are pacifist by character as well as belief, so they usually won't be violent. However, they will steal an unguarded cellphone or laptop in an instant. It's just that on the street you're less at risk of a violent altercation than you would be in most US cities.

Unfortunately, and seemingly as a result of the drug gangs moving in, crime is becoming more violent. Anyone can be mugged now by a gun-toting person on the street, although this is still unusual.

Most violent crime (in addition to the members of drug gangs shooting each other) though seems to be organized. Typical are home break-ins in ritzy neighborhoods (often with the help of the security guard hired by the neighborhood). Although these are more often burglaries when the residents are away, the criminals seem open to invading the homes when the residents are there. Sometimes the residents are just tied up; other times they are killed. Similar but rarer are kidnappings. The rule of thumb for the wealthy here is to prevent others from knowing that they're wealthy, If anyone learns of their wealth, they risk being targets of robberies or kidnappings.

White collar crime is also rampant, especially with regard to real estate, although actually any transaction that involves lawyers must be entered into cautiously. Unfortunately, lawyers swindle their own clients often enough for me to be personally acquainted with instances.