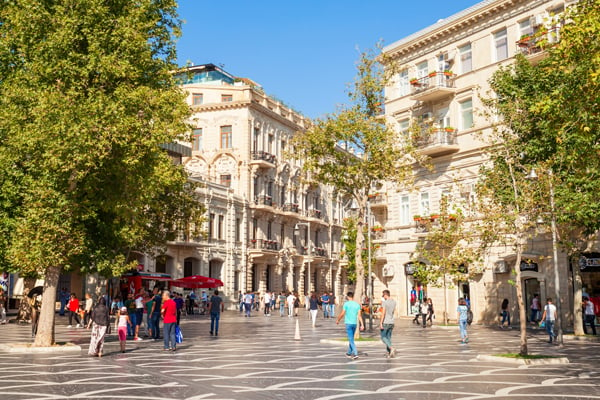 We asked expats in Azerbaijan what they appreciated about their new culture. Here's what they had to say:

"The people are friendly and really excited when you try to learn their language. The food is delicious and if you eat like a local, it's crazy cheap to live here. There is a lot to see if you leave Baku and go to the regions, but you have to be adventurous," said one expat living in Baku, Azerbaijan.

"Not much really. Baku has a delightful old city but again in there, you are leered at constantly," mentioned another expat in Azerbaijan.

"People enjoying the many parks and fountains--makes you forget that the place is bascially a desert. People are very kind and helpful when asked. Those who have studied English are bold about using it--which is unlike other places and can be very helpful. Public transportation is quite good, and inexpensive," commented one expat who made the move to Azerbaijan.

The Most Challenging Aspects of Living in Azerbaijan

Then, we asked expats in Azerbaijan what was most challenging about their new culture. They replied:

"The language is difficult and not many people outside of the tourist places on the Bulvar speak much English. Finding American food and specialty items is difficult. They also don't run clothes in large sizes, so I have to shop online," said one expat living in Baku, Azerbaijan.

"Racism, superiority complex coupled with ignorance, a very disturbed religious zealotry that defies belief, constant yelling and arguments everywhere, corruption, unprofessional work environment. My first landlord broke into our apartment at 11PM because she felt she had the right to walk in whenever she wanted. Our next landlord wanted a full inspection every month. My current landlord calls my being here "letting me live at his house". There are no binding contracts even through an agent, and no concept of personal space or private property. Other than the main areas of the city which are kept immaculate, the "real" city is the world's largest trash can with no clean-up crew. I have never seen people tear up their own apartment building and neighborhoods like this, not even in the poorest countries of Africa or South America," mentioned another expat in Azerbaijan.

"The language barrier and the prices. Baku has to be one of the most expensive places to live. And what is ironic is most of the people live on the poverty line. There is much poverty here and yet the prices are astronomical," commented one expat who made the move to Azerbaijan.

"Of not the culture but the place: the wind is overpowering and dries the skin terrbily; the food, especially for a vegetarian, offers little choice/variety. Bureacracy is cumbersome and mysterious--you need to know someone to get the proper paperwork to get things done," remarked another expat living in Baku, Azerbaijan.

Azerbaijan Forum
Join our Azerbaijan forum to meet other expats and talk about living in Azerbaijan.

Contribute
Help other expats and newcomers by answering questions about the challenges and adventures of living in Azerbaijan.