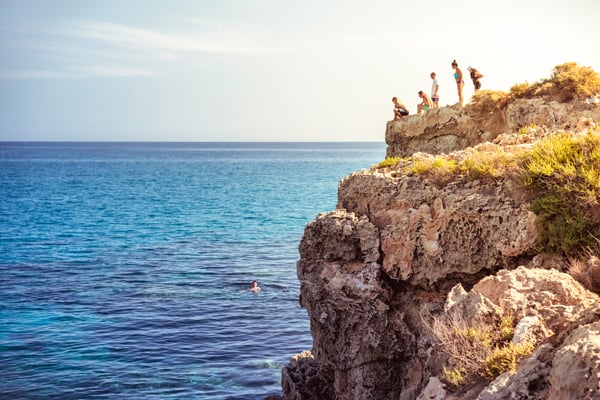 People living in Cyprus share their experiences making friends, adjusting to the culture, what expat life is like in Cyprus, healthcare in Cyprus and more.

Deciding Where to Live in Cyprus

When we asked expats living in Cyprus to offer newcomers advice about choosing a neighborhood and finding a home, they replied:

"I lived in the area for 3 months trying to decide where I would choose to by my house. I found my house through an estate agent," said one expat living in Frenaros, Cyprus.

Expats in Cyprus may get a free expat health insurance quote from our partner Allianz Care, whose plans ensure that you have access to quality healthcare whenever you need it. Allianz's flexible solutions allow you to tailor your cover to meet your needs and budget. Get a Quote

Expats in Cyprus may get a free expat health insurance quote from our partner Allianz Care, a leader in international insurance for expatriates. Allianz's plans ensure that you have access to quality healthcare whenever you need it. Their flexible solutions allow you to tailor your cover to meet your needs and budget..

Expats living in Cyprus talked about meeting people in Cyprus and local clubs and organizations:

"There is a selection of British and Cypriot bars, these are a good meeting place. Also, the local garden centre which offer tea & coffee at the weekend," said one expat living in Frenaros, Cyprus.

"Initally contact with expats living around you. I have not joined any clubs but have a lot of leisure contact both with my Greek and expat neigbours," mentioned another expat in Cyprus.

"The expat population is mainly British and so there are many pubs. I know of no organizations in my area. I do volunteer at the Argos Animal Sanctuary. The is a walking group in the area. There are large Russian and eastern European poulations in Limassol and Larnaca," commented one expat who made the move to Cyprus.

"Join online forums such as BFC Trading Post Cyprus Limassol Living and also Cyprus-AngloInfo as they are full of information - before you move to Cyprus. We also have the UKCA club in the town which is frequented by UK ex-pats. If you are an animal lover, there are loads of sanctuaries that are seeking voluntary help and we also have the Samaritans who regularly need assistance," remarked another expat living in Limassol, Cyprus.

"Cyprus is a free and easy place where 90 percent speak English. Most of Cyprus life reveolves around small cafes and bars," remarked another expat who made the move to Cyprus.

What is it like living in Cyprus? Here is what people had to say:

"This is a family village. Most people work in nearby Paralimni or in the shop and farms around the village. Many work in the tourist resorts of Ayia Napa and Protaras, which are close by," said one expat living in Frenaros, Cyprus.

"The majority of ex pats I find are retired like myself. Of the younger families the younger children seem to go to Greek schools and very quickly adapt to the Greek language. The older children tend to go to fee paying British schools. Socialising I find is the vocal point during the winter months as Protaras is very quiet in the winter. Many of the younger couples tend to find some kind of work, for example, looking after expat properties in between rentals, house painting, hedge cutting and bar work etc but mainly during the summer months," mentioned another expat in Cyprus.

"Lives revolve around family and socializing. Family is very important in Cypriot culture," commented one expat who made the move to Cyprus.

"Limassol is in the centre of the island, so is ideal for access from both airports and makes it an easy place for visiting the East & West coasts within a 2 hour drive to visit Ayia Napa (if that's your cup of tea). Limassol is probably the most cosmopolitan city in Cyprus and there are many nationalities living & working here. It's the hub of numerous off-shore companies and also the main container shipping port. Cruise ships come into Cyprus via Limassol new port. It's a city that covers a multitude of things so yes, it's a living & breathing city for work or play. With a long tourist sea front covering almost 12km nobody can complain they are short of things to do," remarked another expat living in Limassol, Cyprus.

"Cypriot life revolves around family. Beyond that, in Nicosia, it is very materialistic. In the villages, life has a more fundamental quality, still family focused but more associated with culture and what is readily available eg good food, time, tradition," added another expat in Cyprus.

"Most lives revolve around the family. The work ethic is non-existant. After an hours work they need an hours break to recompose themselves. For sun, sand and rest it is ideal. For business it is a joke," remarked another expat who made the move to Cyprus.

We asked expats in Cyprus what they appreciated about their new culture. Here's what they had to say:

"The friendliness and generosity of the people. The culture is very family-oriented and as such, it is a very safe and joyful place to live. The pace of life is more relaxed. As the Greeks say, siga siga (slowly slowly)," said one expat living in Frenaros, Cyprus.

The Most Challenging Aspects of Living in Cyprus

Then, we asked expats in Cyprus what was most challenging about their new culture. They replied:

"There are many Cypriots who are not animal lovers and because there is a lareg population of homeless dogs and cats on the island, sometime you see animal cruelty. This saddens me," said one expat living in Frenaros, Cyprus.

We asked expats about diversity in Cyprus and whether locals are accepting of differences. They said:

"The village is mainly Cypriot, but has a growing English population. Everyone gets on well together. It's a very peaceful place to live," said one expat living in Frenaros, Cyprus.

"I find different nationalities mix frequently but in general each nationality tends to live in an area of their own nationality. In terms of religious diversity most nationalities attend their own church but some,like myself, also attend service of a different religion such as Greek orthodox," mentioned another expat in Cyprus.

"Mainly Greek Orthodox for religion. In Frenaros, there is a mix of British and Cypriots. I find the Cypriots very accepting - all my neighbors are Cypriots," commented one expat who made the move to Cyprus.

"The ethnic groups in the town range from Greek, Cypriots, UK citizens, Sri Lankan, Phillipino, Russian, Polish, Croatian and Ukraine, etc The Cypriots mostly follow the Orthodox religion, so Easter does not always fall at the same time as UK Easter. There are still Turkish mosques here even after the Turkish invasion of 1974. It's a multi-racial city and fairly accepting of others views and beliefs," remarked another expat living in Limassol, Cyprus.

"City Cypriots are snobs, every one else is there to do them service. All declines in Cypriot society are attributed to the influx of foreigners. However, if you are a foreign investor, money launderer or job provider rather than a maid or other low paid worker, you are welcome and will find somewhere to live, school your kids, etc albeit at exorbitant rates," added another expat in Cyprus.

"Because Cyprus lives on tourism there is a wide diversity of people and almost anyone is easily accepted," remarked another expat who made the move to Cyprus.

Get a free international health insurance quote from our partner, Allianz Care, whose plans ensure that you have access to quality healthcare whenever you need it. Allianz's flexible solutions allow you to tailor your cover to meet your needs and budget.

Cyprus Forum
Join our Cyprus forum to meet other expats and talk about living in Cyprus.

Contribute
Help other expats and newcomers by answering questions about the challenges and adventures of living in Cyprus.