Summary: The approximate population of Haifa, Israel is around 280,000 people. People describe Haifa as a vibrant, diverse, and beautiful city. Expats love the city's Mediterranean climate, its stunning views of the sea, and its friendly locals. The weather in Haifa is typically mild, with temperatures ranging from the mid-50s to the mid-70s Fahrenheit (10-25 Celsius). The average cost of living in Haifa for an expat is around $1,500 per month. The cost of a one bedroom apartment is around $800 per month, and a two bedroom apartment is around $1,200 per month. 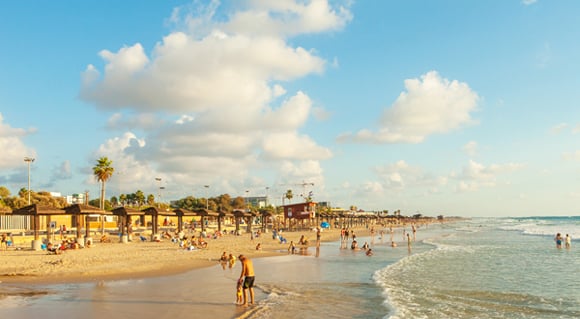 What do I need to know about living in Haifa?

When we asked people what advice they would give someone preparing to move to Haifa, they said:

"If you want a quiet family centered lifestyle go to Haifa. If you're single and want night-life go to Tel Aviv. If you want musuems and history go to Jerusalem," said another expat in Haifa.

How do I meet people in Haifa?

When we asked people living in Haifa about club and activities where newcomers can meet others, they responded:

"Haifa is a very laid back city with a population of about 300,000. There are about permanent English speaking families and many temps who are studying at the universities or working in hi-tech. The young English speakers (up to age 35), have lots of pub evenings and outrings an they are well organized. There is the Anglo-list on Facebook which has about 2000 members and a smaller grou p - Haifa Young English Speakers too. There is a weekly walk on the beach, there is an English speaking branch of the Freemasons, Rotary, BNI and other similar networks. There are lots of volunteer organization who want English speakers to participate in their activities. There is a large Russian community in Haifa as well. A large Bahai and Filippino community live here too," explained one expat.

Will I be able to find a job in Haifa?

When we asked people about industries and career opportunities in Haifa, they reponded:

"Haifa is affectionately known as the Worker's City. Main Industries: Many, many hi-tech and R&D eg. Google, Intel, Philips, IBM, 3 public hospitals, 3 universities, a busy port and of course many small and medium size businesses of all types. Networking, Social Media, Israemploy.net, Anglo-list.com, AllJobs, Manpower, Marksman Personnel are just a few on-line resources you can start with," said another expat in Haifa.

When we asked people living in Haifa what life is like and how people spend their time, they said:

"Haifa is a family city. The beach, the forests and nature trails are big attractions. It takes less than an hour to get to Tel Aviv which is the main commercial center. There is a huge hi-tech center in Haifa which employs many expats and it is close to another major hi-tech center - Yokneam. THe city of Haifa is focussing on the younger generation, students etc., and are working hard to improve facilities and housing options for them," said another person in Haifa.

Is there a lot of diversity? Are people in Haifa accepting of differences?

"Haifa is super-tolerant of religious and cultural diversities. In fact Jews, Christians, Moslems, Bahai, Druze all co-exist, live and work together in mutual respect and harmony," said another person in Haifa.

Contribute
Help others in Israel by answering questions about the challenges and adventures of living in Israel.