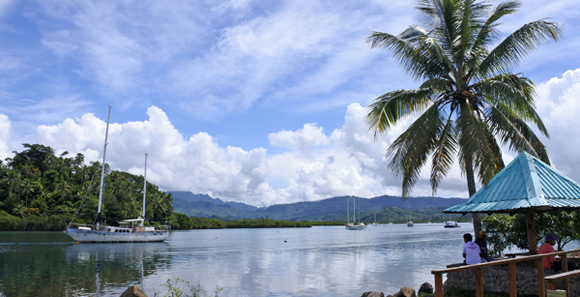 An expat in Savusavu, Fiji talks about the realities of living in Fiji. She and her husband quickly realized that being a resident and being a tourist are two completely different things.

No training, but did over 4 years of research before moving here. Met a lot of other expats who were already living here and they did not enlighten us to the perils or dodgy people that live here.

Not too much. We thought we had done significant research.

Just awful. For a religious country (there's a church in every village, sometimes two), the fraud, the theft, rape and drug related crimes are abundant.

Very much so. We are extremely angry about the fraud committed against us, from two individuals that we had known for few years, prior to moving here. Between the two of them, we have lost over one third of the money we have invested here. And the Police do very little to help you.

Definitely anger, anxiety, depression. Frustration at Police and Authorities who do little to help you. Homesick and wishing we had never moved here.

It's picturesque and quirky. We love our surroundings, which to be honest, keeps reminding us why we moved here. We have met some lovely people, despite the crooks.

Trying to remain positive and moving forward. Problem solving, as every day is a challenge.

We have become infamous, the majority of people who live here know our story. We can only hope that by telling our story, that we can save others from being cheated by these two crooks also.

Don't believe the "bula" smiles and greetings. Unfortunately it is mostly false. Being a tourist here and being a foreign resident are two completely different things. Be wise about who you befriend and who you give your money to.

Perhaps this is more proof that human beings anywhere can be terrible, but it does remind me lot that sunny places have a lot of shady characters. I too have gone through a rip off and betrayal by someone I knew 11 years in the states. When we got to Mexico, she got thousands of dollars from me I will never see again. I saw her abuse her children and her animals & when I realized I was powerless to stop it, I did the only thing I could do. I got away from her and moved to a different part of the country.Then there were new revelations. I discovered here that if I reported a maid stealing from my room in a hotel, the owner could kick me out in three days and did & I could do nothing. What it did do was make me additionally appreciative that I was raised in America with laws, rights and a moral compass and although I was not there, I could hold on to who I was and find a few good local friends who were good people. I had researched Oaxaca, Mexico for a year before moving here and its a very big state with many different pros and cons. Culture shock is a learning experience I wouldn't miss for the world. Learning a new language is a constant adventure. You are lucky that you have a partner to share the ups and downs. My dog and cat , who moved with me from the states have been my sanctuary. They are better than humans when it comes to loyalty and devotion. If they could talk as they do in Dr. Dolittle movies, life would even be better. I wish you both smooth sailing from here on in and really appreciate your sharing your experience.

I go out of my way to try to prevent the same exact type of fraud and theft that occurred with you from happening to ex-pats coming to Panama. I worked here back and forth for 22 years prior to retiring here in 2011, and the bait and switch particularly with real estate that prey upon the very people they wish to come here is simply awful.

Get a quote for expat health insurance in Fiji from our partner, Cigna Global Health.
Get a Quote