Tax Guide for Americans in Mexico

Summary: This tax guide for Americans living in Mexico is an important read. Do you need to file a tax return in Mexico? Plus, an overview of Mexico's tax system, income tax rates, Mexico resident qualifications and more. 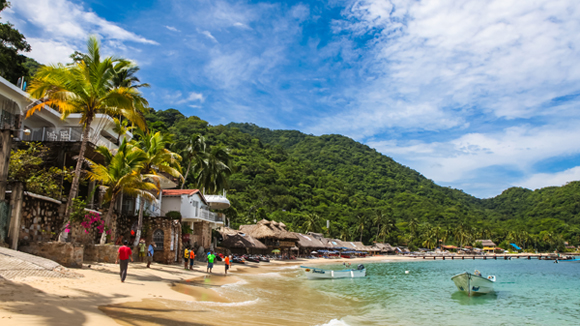 Wherever you live in the world, you are obligated to file a tax return with the IRS, reporting your worldwide income. Along with the regular tax return for income, many individuals are also required to submit a report disclosing assets in foreign bank and financial accounts by using FinCEN Form 114 (FBAR).

Tax returns for Americans who reside within Mexico

As a US expat in Mexico, you may need to file a Mexican return, and perhaps pay taxes, on your income to the Mexico Government. Here are some simple guidelines on dealing with, and the obligations for filing Mexico taxes.

The US and Mexico have a tax treaty that can offer taxpayers additional benefits.

Resident individuals are subject to Mexican income tax on their worldwide income, regardless of their nationality. Non-residents, including Mexican citizens who can prove residence for tax purposes in a foreign country, are taxed solely on their Mexican-source income.

The following tax rates are effective for resident individuals for calendar year 2019:

While 35% may sound attractive on the surface, you reach the 35% bracket when income reaches $3.5 million pesos, which, at current exchange rates, is about $182,000 USD.

As a Mexican tax resident, what income taxes are you subject to? Income subject to this tax would include interest, dividends, rental income, capital gains, foreign social security payments, etc. It is important to note that Mexican taxes are not calculated the same way they are in the U.S. or Canada. For example, what is tax qualified in the U.S. or Canada is not tax qualified in Mexico. How cost basis and depreciation are calculated are different too. Exemptions, deductions, tax rates, filing deadlines, and estimated payments are all established by Mexican law and are not the same as our neighbor's rules to the "Norte."

Who is Required to File a Tax Return in Mexico?

The nonresident employee does not receive complementary payments from nonresidents in consideration of services rendered for which salary income was obtained.

Additionally, to the extent that the individual qualifies for relief in terms of the dependent personal services article of the applicable double tax treaty, there will be no tax liability. The treaty exemption will not apply if the Mexican entity is the individual's economic employer and, as such, bears the cost of the individual's compensation.

Additionally, individuals of Mexican nationality should retain their status as tax residents of Mexico when proving their tax residency in a country with a preferential tax regime for the year in which the notice of termination of tax residence is filed and for the following three years. It is important to mention that this provision is not applicable in those instances where Mexico has executed an unlimited exchange of information agreement with such preferential tax regime country.

Mexican-sourced income but not a Mexico Resident

Individuals considered non-residents are taxed on their Mexican-sourced income only and are not subject to file a Mexican annual income tax return, as monthly tax payments/withholdings are considered as final or definitive.

Non-residents are allowed to have an exempt income on the first MXP125,900 wages earned, an income tax rate of 15 percent is applied when income exceeds MXP125,900 and 30 percent on income that exceeds MXP1,000,000 within a 12-month period. Individuals should accumulate the income received every month to determine the tax rate to be used to calculate the corresponding income tax.

When are tax returns due?

The tax year in Mexico is, like the US, from January 1 to December 31. Annual tax returns are due by April 30 following the tax year-end, which is December 31. Extensions are not permitted. Nonresidents are not obligated to file a Mexican annual tax return since the payments made are considered as final or definitive.

Mexican employers who have employees on payroll in Mexico pay Social Security taxes. The responsibility to pay these taxes falls on the employer. Foreigners who work for Mexican employers are subject to Mexican social security contributions when an employment relationship is deemed to exist in Mexico. Such relationship is deemed to exist in Mexico when the employee's activities are supervised, controlled, or governed by a Mexican employer. These are based on several components where the capped salary is 25 times the minimum wage of Mexico City (for 2016 the minimum wage is MXN 73.04 per day).

Tax Treaty between the US and Mexico

Are You A US Expat in Mexico With Questions?

Contact us today to learn more from our expat CPAs and IRA Enrolled Agents. We can answer your questions and get started on your US expat taxes.

Michael Tankersley, MBA, EA is with American Expatriate Tax Consultants and understands the tax complexities of U.S. citizens living abroad. American Expatriate Tax Consultants' dedicated team includes Enrolled Agents and CPA's who focus on expatriate taxes and can handle the most complicated U.S. tax returns, including FATCA and FBAR. With their convenient and secure remote service, you can work with their tax experts from anywhere in the world.

Contribute
Help others in Mexico by answering questions about the challenges and adventures of living in Mexico.