An woman who moved to Norway with her Norwegian husband discusses how not being fluent in the language has impacted her social life and overall adjustment to life in Norway. She advised others moving to Bergen to make a major effort to learn the language. Plus, she suggested that expats find a few indoor hobbies to keep themselves busy and preoccupied when it's raining.

No, I did not. I did, however, do a lot of reading on the internet.

I've been taking Norwegian Language courses for 10 months now and it's going slower than I had hoped. I can read and write but have a hard time understanding natives when they speak. I doubt I will be fluent any time soon but I know that these things take time.

Not really. I had visited Norway several times before I actually moved here, so I thought I knew what I was getting into. Little did I know that I was looking at life here through rose-coloured glass while on vacation. Who doesn't do that anyway, while on vacation?

Moving to Norway soon? AGS Worldwide Movers is a leader in the international moving industry. Their experience and expertise allows them to guarantee their clients the best quality moving services. Get a moving quote today.

Extremely. It's easy to relate to other people if you've been in their shoes, however, reading about other experiences that you have yet to go through yourself..? That's a completely different story. I read a lot before moving to Norway and thought to myself that there was no way I could imagine myself in that situation because of so and so. But the truth is, you never really know until you're there.

The honeymoon stage lasted a few days until I was invited to a social gathering. Right then and there, I automatically moved on to the irritation-to-anger and rejection stage. I was surrounded by a group of Norwegians who did not bother to speak a word of English throughout the entire night. I was greeted with a one word answer every time I tried to strike a conversation with someone. Right then and there, I realized that this was going to be the first in a string of situations where I will always feel that I don't belong here.

I'm a lot more withdrawn now to the point that I can hardly recognize myself any more. I get anxiety and stress at the thought or expectation of a social gathering coming up, especially if it involves a group of Norwegian people. I no longer get excited at the thought of meeting new people. I find myself opting to stay home and hide from people rather than going out and actually experiencing life. This, ofcourse, is causing a strain in my relationship with my spouse, who doesn't seem to grasp what it's like to be surrounded by people that make you feel like you're invisible by cutting you out for hours and hours. In retrospect, I think I was going through depression without even knowing it. I find myself thinking back and appreciating what I used to have back home. I never realized how easy I had it until I moved to Norway. As the cliche goes - never really know what you had until it's gone.

The beautiful nature and the lush green surroundings. Although, I have to admit that it can get tedious sometimes, as I am used to the extravagant city life with skyscrapers at every corner and streets bustling with people. I love the seafood here. I like how people are very independent.

Not knowing how to speak the language. It's not easy learning a new language from scratch. I tried speaking Norwegian when I first started taking the course but my spouse was very critical of my pronunciation to the point that I became fixated on making sure the words sounded correctly instead of actually speaking the language itself. Living with a husband and adjusting with life in his country isn't easy either. And the prices here are extortionately expensive. It's difficult for me because back home, I have gotten accustomed to the fact that having fun always involves spending money.

None. Or I probably didn't realize it was a blunder.

Yes. Make sure that you have one, two or more serious indoor hobbies to keep you busy and preoccupied. I can't stress this enough. There will be times when you are stuck indoors because it's raining too much or it's just too expensive to go out for 3 nights in a row. It's important that you have something meaningful going on for you while you're at home especially during winter. As for the language, take the language courses seriously and associate yourself with the best students in class in order to get ahead. Don't slack around when it comes to this. There will be days when you don't think you can go on but just hang in there. Hard work will pay off.

Get a quote for expat health insurance in Norway from our partner, Cigna Global Health.
Get a Quote

Information about healthcare, expat health insurance and hospitals in Norway. 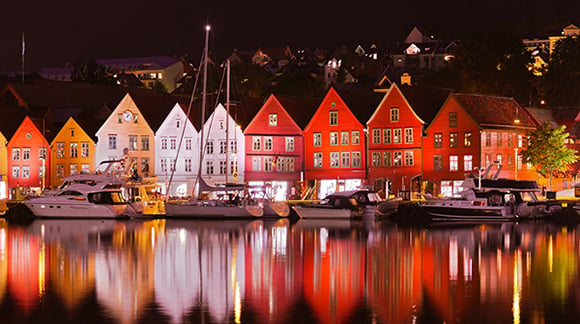 An expat from the U.K. admits to having a hard time adjusting to the culture in Bergen, Norway.

Visit our Norway Forum and talk with other expats who can offer you insight and tips about living in Bergen, Norway.

Get a quote for expat health insurance in Norway from our partner, Cigna Global Health.
Get a Quote

Information about healthcare and hospitals in Norway.

Support your favorite restaurants in Bergen as they recover from the pandemic. Submit a free listing for them on Expat Exchange to help spread the word about them to the expat community.

An expat from the U.K. admits to having a hard time adjusting to the culture in Bergen, Norway.