I didn't get any pre-trip training. Nor did I seek it out, which was my mistake. I had lived in SE Asia for a couple of years when I was a child, so I didn't expect to be "shocked".

Moving to Vietnam? Get a health insurance quote from our partner GeoBlue. With access to over 1.7M medical providers in 190 countries around the world, GeoBlue provides members with solutions and industry-leading digital services - ensuring top-quality coverage to people who live, work, study and travel internationally. To speak with GeoBlue's Sales Team, call 1-855-216-9486 (US) or e-mail .

I knew nothing of Vietnamese before I moved there. I didn't even know which writing system they used. I spent six months there & tried very hard to learn the language, but it was very difficult to learn, not only because the language itself is difficult, but it was difficult for me to meet Vietnamese people to practice with.

No. I didn't expect to be "shocked" at all. It was only later that I realized that the frustration I was experiencing was culture shock.

Moving to Vietnam soon? AGS Worldwide Movers is a leader in the international moving industry. Their experience and expertise allows them to guarantee their clients the best quality moving services. Get a moving quote today.

Pretty significant. I was so unhappy there that I moved away after only six months. I didn't realize that my frustrations were due to culture shock. If I had known that while I was experiencing it, I might have been able to stay there longer. It's important to understand what culture shock is to be able to recognize it in yourself.

Sure. At first I was excited to be living in another country (honeymoon stage), taking lots of photos & describing my daily life on my blog. Then found myself increasingly irritated at the cultural differences, & I moved away before I reached any of the other stages.

I love being able to ask how old someone is.

It's very difficult to be a Western woman living in Vietnam. The Vietnamese culture is very male-oriented, so it took several months before I was able to make any friends - & then it was just one friend. I felt lonely most of the time.

I probably did, but you get away with a lot in Vietnam. They just figure you're weird because you're a foreigner. For example, Vietnamese women don't drink or smoke unless they're prostitutes. But I could do both without consequence because I'm a foreigner.

Talk with Expats in Vietnam

If you're not involved in our Vietnam Forum, it's a great place to meet others in your area, get answers to questions about moving to Vietnam or offer advice to a newcomer.

It's an exciting time to live in Vietnam - with more and more tall buildings crowding the city skylines and rural areas developing rapidly as well. Learning Vietnamese poses a major challenge for most expats, but Vietnam's warm, welcoming people make up for the challenge.

It's an exciting time to live in Vietnam - with more and more tall buildings crowding the city skylines and rural areas developing rapidly as well. Learning Vietnamese poses a major challenge for mos...

Peter Goudge explains all about Vietnam's iconic hat, the non-la, and how it ties into the South East Asian nation's history, folk lore and every day life. There's a lot more to this simple hat than meets the eye!

Peter Goudge explains all about Vietnam's iconic hat, the non-la, and how it ties into the South East Asian nation's history, folk lore and every day life. There's a lot more to this simple hat than ... 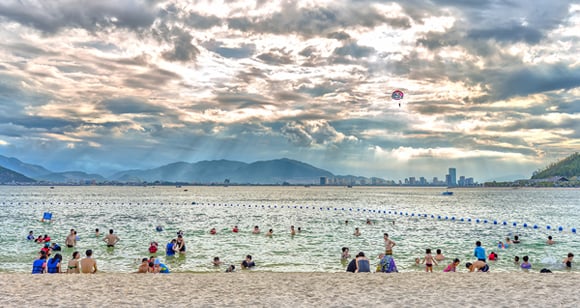 5 Best Places to Retire in Vietnam

Thinking of retiring in Vietnam? Here are 5 of the best places to retire in Vietnam.

Thinking of retiring in Vietnam? Here are 5 of the best places to retire in Vietnam. ...

Expats who have moved to Vietnam report a positive experience living in the Southeast Asian nation. They cite the culture, the food, the people as some of the things they love about Vietnam. The heat is a challenge for some!

Expats who have moved to Vietnam report a positive experience living in the Southeast Asian nation. They cite the culture, the food, the people as some of the things they love about Vietnam. The he...

You mentioned that being a woman in Vietnam was harder as it is Male dominated. I am looking at living there for 2-5 years with my Husband and three daughters. They will be attending international school but you have given something else to really consider. Thank for your honesty.

Hello, I am Peter and come from US . Now, I am living and working in Viet Nam, I hve lived in Viet Nam for 5 year. I feel interesting when living in Viet Nam. It has brang me many new experiences in my life. At first, I had difficulties such as language, culture, life style and so on. While changing weather could affect health, different culture and customs might influence my mind and made me become less confident. Every day, I had to struggle for survival in a strange country. And now, I adapts to a new which is a real challenge for evey foreigner. I have chances to dissover new culture, ways of thinking, history, custom and life style. As a result, I had overcome myself and had the interesting experiences as I had expected. Now, I am living with my family in rent house Ho Chi Minh. The rent house is very convenient with full facilities. I am satisfied with present life in Viet Nam. Living in Viet Nam is really a interesting life. You can visit our web: Living in Vietnam Thanks,

Should have stuck it out. Guess that's all a part of being new to Asia. I live in Bien Hoa. Been here 7 months now, love it, and have lived in 7 countries around the world and have extensively traveled through about 20. I am also a female (25) and though sure at first it's hard to make friends and find your way around, if you stick it out and send positivity out there, things usually turn around. Also managed to find a few foreigners in town too which makes things better.

I've been living here for over 5 years now and I absolutely love it ! The people of Bien Hoa are actually quite friendly. They are very curious about Foreigners and eager to come to know and understand them. You should have learned a little Vietnamese so you could communicate with them - and even spend some time drinking with them on the weekends. I hate to think you felt that way while living here all that time. What a Tragedy ! Well, good luck in your future travels.

i am staying in Vung Tau, Vietnam and I am very happy. When yor in another country, cultural change will bound to come but if you see in right prospective then Vietnam is quite better place than many countries, people are cool, peaceful, cheerful and happy and they welcome strangers with smile. I love Vietnam, any body who does not like Vietnam problem is with him or her and nobody is forcing to stay them here

regardless of your disposition, life in Vietnam can come with a number of frustrations. the culture here is significantly different from the west and accomplishing some simple things can require more effort than might seem reasonable. 'Foreigners', like Myself are given a high degree of latitude so whatever cultural mistakes i might commit are quickly forgotten. If you live in Bien Hoa or the surrounding area you might try to reach out to other Westerners, such as myself, for the occasional chit chat over coffee lest your inherent conversational wit might waste away

Get a quote for expat health insurance in Vietnam from our partner, GeoBlue.
Get a Quote

Get a quote for expat health insurance in Vietnam from our partner, GeoBlue.
Get a Quote Call

Vietnam Forum
Join our Vietnam forum to meet other expats and talk about living in Vietnam.

It's an exciting time to live in Vietnam - with more and more tall buildings crowding the city skylines and rural areas developing rapidly as well. Learning Vietnamese poses a major challenge for most expats, but Vietnam's warm, welcoming people make up for the challenge.

Expats who have moved to Vietnam report a positive experience living in the Southeast Asian nation. They cite the culture, the food, the people as some of the things they love about Vietnam.

Best Places to Live in Vietnam

Thinking of retiring in Vietnam? Here are 5 of the best places to retire in Vietnam.

If you're moving to Vietnam, healthcare and health insurance require careful consideration. This article covers the quality of healthcare at hospitals and clinics in Vietnam, the availability of prescription medications, vaccinations and more.

Real estate listings in popular cities and towns in Vietnam. 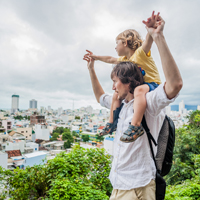 Having a Baby in Vietnam 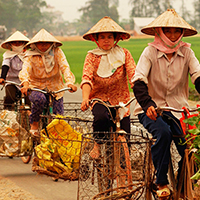