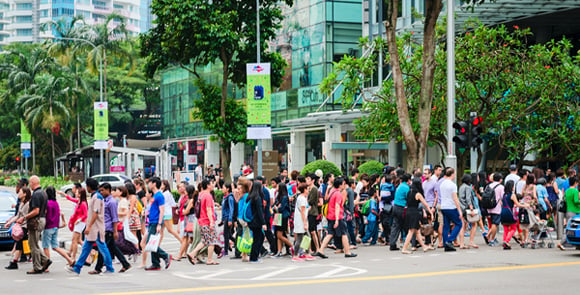 An American woman who lived in Singapore for about 7 months loved the people, the lifestyle, the safety and the fresh, wholesome food. Her biggest challenges were the heat, the humidity and the lack of air conditioning.

Yes, before for 2 weeks, as well as having traveled extensively to Asia and Europe.

They primarily speak English. I learned a few words in Mandarin, but most people spoke English.

Not at all! I thought since they spoke English, and lived in a style comparable to the US I would be fine, but I was wrong.

It was mild, but kept me from doing well in my job as a teacher, and also caused panic attacks when I was around large crowds like on the subway and in a shopping area.

I went through the honeymoon phase, then started in the irritation stage, then decided I needed to leave and go home--7 mo. I think if I had given it a bit longer I would have been fine, but I panicked and ran.

I felt depressed, anxious and homesick. I missed my grown kids, my grandkids, and wondered why what had possessed me to want to go overseas to live.

I loved the people, the lifestyle, the safety and the food. Most everything was healthy and wholesome--not much food with preservatives or boxed food. They had many fresh vegetables and fruits which I loved and a variety of food including Chinese and Indian, which I liked.

The heat and lack of air conditioning, the humidity, and not having a car so we had to take public transportation.

I tried to say words in Chinese at times which came out as different words due to the tonal aspects of the language.

Don't assume you won't have it! Living in another country other than the US, no matter how "civilized" and clean it is, always brings challenges which you may not anticipate! I acted in ways I did not expect and felt like I could not make it there. Had I just relaxed and given it another 4 mo.,I think I would have been OK. I just tried to absorb it all and jump in like I was in the US and that didn't work.

There are numerous international schools in Singapore. This article highlights some of our members' recommendations.

10 Tips for Living in Singapore

Expats love that Singapore has dozens of expat clubs and associations, wonderful international schools and incredible nightlife. These factors definitely help to make up for the high cost of living and relentless heat and humidity.

Having lived in Singapore for ten years I find that most people either assimilate or reject the culture in about six months. I was able to assimilate and found my stay there to be a very rich experience, got married, and had two sons. My wife and I returned to the USA with our sons but have made regular trips back. We have a home there and will look forward to retirement there in next one to two years. Since our home is paid for and we are able to easily leverage pubkic transportation, our cost of living is very minimal. It will allow us to spend 3 to 6 month periods in Thailand, Vietnam, and China. This will help offset the heat and humidity which occurs from March through October during the Soutwest Monsoon climate when wind currents come up from Sumatra. In November to March the NorthEast Monsoon kicks in and brings cooler air down the coast of China. I have no negative comments about Nanakapp as this person has their own unique family situation and cultural background. Plainly, It works well for some people and not for others. I wish Nanakapp well and hope a more preferable situation is discovered which brings happiness.

Get a quote for expat health insurance in Singapore from our partner, Cigna Global Health.
Get a Quote

There are numerous international schools in Singapore. This article highlights some of our members' recommendations.

There are numerous international schools in Singapore. This article highlights some of our members' recommendations....

10 Tips for Living in Singapore

Expats love that Singapore has dozens of expat clubs and associations, wonderful international schools and incredible nightlife. These factors definitely help to make up for the high cost of living and relentless heat and humidity.

Expats love that Singapore has dozens of expat clubs and associations, wonderful international schools and incredible nightlife. These factors definitely help to make up for the high cost of living a...
Singapore Guide