Summary: Expats talk about what it's like living in Pakistan and cover topics like healthcare, expat lifestyle, typical clothing, locals view of foreigners and much more. 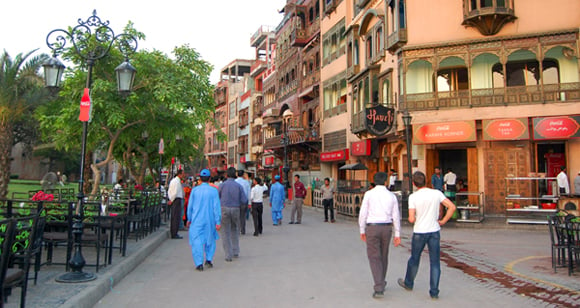 "Most expats can easily afford to be completely cut off from the local environment, own cook, own cleaning lady, own driver, all very affordable. For reasonable costs you can be living in your own place, meet friends in clubs and basically not be on the streets. Or, on the other side you can get dressed locally, learn basics of language and blend in - person of any color or composure can be possibly from Pakistan. The second option is of course less safe, but safety is a very relative term. You can get mugged, which is rather common. The security threats resulting from terrorism are relevant only in areas like Peshawar and Quetta, main cities are hit very rarely (statistically, when taken into consideration that there is 186 million people, the attacks and casualties are not at all common). Women are generally safer than men -- as harming a foreign woman is a double crime (1. harming somebody, 2. harming a guest to the country, 3. harming a woman). Don't bring around too much cash and be ready to lose your cellphone (if they ask, give it, no arguing)," wrote one expat.

"You will get foodpoisoned. Fullstop. I have not met a single person from as many as 20 countries (except of India) who didn't have stomach problems after arriving to Pakistan. Ingrediences and ways of making are so different that the only way to prevent is to not eat any local food at all and live only from McDonalds and european restaurants, but even in this case it's possible that you'll catch a germ. The easiest is to get ready for it, get sick in the first two weeks, go to doctor and get some antibiotics prescribed and within a week you are okay. Only 10% do not finish with a visit of the doctor. Health care is cheap and easy to find, it works on strict cash basis - you pay and claim from insurance company later," wrote another expat.

"Basic medical care is available in major Pakistani cities but is limited in rural areas. Facilities in cities vary in quality and range of services and may be below U.S. standards; facilities in rural areas are consistently below U.S. standards. Medical facilities require pre-payment for services, and most do not accept credit cards. Effective emergency response to personal injury and illness is virtually non-existent in most of Pakistan. Ambulances are few, lack medical equipment, and are not necessarily staffed by medical personnel. Visitors and foreign residents should bring sufficient supplies of prescription and commonly used over-the-counter medications. Many U.S.-brand medications are not available, there is a high incidence of fake pharmaceuticals, and the quality of locally produced medications is uneven," wrote the US State Department.

Expats in Pakistan may get a free expat health insurance quote from our partner Allianz Care, whose plans ensure that you have access to quality healthcare whenever you need it. Allianz's flexible solutions allow you to tailor your cover to meet your needs and budget. Get a Quote

Expats in Pakistan may get a free expat health insurance quote from our partner Allianz Care, a leader in international insurance for expatriates. Allianz's plans ensure that you have access to quality healthcare whenever you need it. Their flexible solutions allow you to tailor your cover to meet your needs and budget..

"Pakistani food is amazing! Very spicy (which is something you have to get used to, as everything is spicy), but once you are over it, its one of the best kitchens in the world. Core is chicken meat and non-fermented bread. Do not expect pork, beef and fish are rather expensive. Its very hard to be vegetarian in Pakistan, chicken meat is omnipresent," added another expat in Pakistan.

"As for language, English is absolutely okay, but knowing basics of Urdu helps in price negotiation and also with work with locals (it's good to know what they talk about)," said one member.

"Family and prestige (mostly in front of family) is the highest value. The jobs with the biggest companies and fanciest names are the best, even if the wage is not that high. Invitations for family dinners, weddings or celebrations are common and normal and are part of the culture. People who know you for few minutes might invite you home, it's more than just polite gesture, it's actually an invitation. If you politely refuse, they won't feel offended. Presence of a foreigner on any family event increases the prestige of the host and event. Losing prestige is the highest loss," explained one member.

"Alcohol is omnipresent but invisible. Most of young people have experience with alcohol, despite it being officially forbidden to Muslims and available only for foreigners and Christians. Local, cheap (very bad tasting) alcohol and foreign, imported, expensive alcohol are available. A combination of cheap and good is not possible. Alcohol is not drunk publicly, only at home and in private circles. A Pakistani drinks to get wasted, as there are no places to go while drunk, the fun ends with the bottom of the bottle," reported an expat in Pakistan.

"Nature of relationships are different between cities and villages. Arranged marriages and virginity before marriage is very common. Public presentation of any other relationship between a man and woman than husband-wife, father-daughter and brother-sister is a taboo. It's OK for a foreign girl to have a Pakistani boyfriend, mostly the male part of the nation will consider it a good thing. They don't expect the boy to get married to a foreigner, but they will accept it most probably. A Pakistani girl to have a foreign boyfriend is not that good. It's not considered a good thing by anybody, the family (if not very modern and from big cities) will frown on and badly judge the girl. If a Pakistani girl dates a boy, family must agree, or else the family ties might get severed and marriage is always seen as a clear next step," said one member.

"Foreigners are still very rare and Pakistanis are very hospitable. Simple walking the street can bring you lots of people trying to start conversations. In Pakistan it is OK to stare... If somebody is staring at you and you try to stare back the person will not feel awkward, s/he will actually feel encouraged to come and talk to you. If you are a man, do NOT stare at women, its' an art that only Pakistanis can perfect (both sides look at each other, but it looks like they don't even notice their presence)," wrote one expat.

"It's okay to be Christian, they have no animosity against them. But Pakistanis do not understand a situation when you don't have a religion, saying you don't believe in any God will create a big gap between you and locals. The religion is very alive and is the core of behavior," explained one person.

Another member said, "It is not common to see women wearing headscarfs on the street (at least in towns), in villages they use loose scarfs that cover the head only partly or they go straight for Burkas (whole body cover). Local dress - a loose shirt till knees and baggy pants - is the standard for dressing of all classes, while business men wear suits, business women wear fancy versions of this dress. In middle and lower class everybody wears the local dress."

Get a free international health insurance quote from our partner, Allianz Care, whose plans ensure that you have access to quality healthcare whenever you need it. Allianz's flexible solutions allow you to tailor your cover to meet your needs and budget.

Get a quote for expat health insurance in Pakistan from our partner, Cigna Global Health.
Get a Quote

Get a quote for expat health insurance in Pakistan from our partner, Cigna Global Health.
Get a Quote

Pakistan Forum
Join our Pakistan forum to meet other expats and talk about living in Pakistan.

Expats talk about what it's like living in Pakistan and cover topics like healthcare, expat lifestyle, typical clothing, locals view of foreigners and much more. (more)

Real estate listings in popular cities and towns in Pakistan.