Summary: Expat in Scotland love traditional Scottish culture, beautiful landscapes and they experiences both combine to make possible. Be aware of the high cost of living, but if you come prepared you will always want to come back to this very special place.

Expats in Scotland find a proud country with all kinds of opportunity and cultural tradition.

Scotland is divided into 32 council areas. A settlement is an urban area that may contain more than one "locality." A locality is a populated area within the limits of a city, town or village.

Glasgow is the most populous city in Scotland, with 590,000+ people living there, while Edinburgh - Scotland's capital - has about 465,000. Aberdeen and Dundee round out the cities with more than 100,000 people. The total population of Scotland is estimated to be about 5.3 million people.

Cities and Towns in Scotland

One expat in Edinburgh reported that "I always describe Edinburgh as: As Boston is to New York, so is Edinburgh to London. In other words, Edinburgh is London's smaller, more genteel cousin. Most Americans would call it quaint. It's a compact city and you can walk almost anywhere."

The same expat also wrote that "Edinburgh is a truly cosmopolitan town. Although English is the common language, you will also hear Urdu or Hindi along with a host of European languages from travellers."

Another expat in Aberdeen wrote that U.S. expats should "be prepared for just how much it really costs to live over here. It is almost 60% higher than the States."

Moving to Scotland soon? AGS Worldwide Movers is a leader in the international moving industry. Their experience and expertise allows them to guarantee their clients the best quality moving services. Get a Moving Quote

Moving to Scotland soon? AGS Worldwide Movers is a leader in the international moving industry. Their experience and expertise allows them to guarantee their clients the best quality moving services. Get a moving quote today.

The mere mention of Scotland typically elicits images of kilts, bagpipes, haggis and an impenetrable brogue.

Scottish culture and traditions, however, continue to evolve and have a lot more to offer.

Scottish cuisine offers a great deal more than the haggis mentioned above. Fresh fruits, oats, seafood and more all combine to help form one of the cornerstones of Scottish culture.

Of course, Scotch Whisky is also world renowned, and it has experienced significant growth in recent years.

The restaurant scenes in Glasgow, Aberdeen, and Edinburgh.

Scottish Beer also does great credit to Scottish Cuisine and Culture. There are excellent Craft Beer Pubs in Glasgow and the Great Grampian Beer Festival is worth noting.

Working in Scotland provides a wealth of opportunities in a great number of industries. Financial services, energy, pharma and telecom all contribute to the Scottish economy.

An expat in Banchory, Scotland wrote that the town is located "approximately 20 minutes from Aberdeen where there are several oil and gas companies. Aberdeenshire Council website is a great place to start searching for available jobs in the area."

Scotland is part of the United Kingdom

Many people are unaware of exactly what the composition of the United Kingdom is, so let's go over it one more time to avoid the embarrassment - and possible scorn - you'll receive if you mess it up over there. I once made a mistake writing an article for Expat Exchange about Ireland and got the countries jumbled when using cut and paste. You would have thought I was advocating some kind of horrible crime based upon the reaction I received.

In 2014, there was a Scotland Independence Referendum to have Scotland break out from the UK and once again become it's own country, but Scottish voters rejected the move.

U.S. citizens must still pay their taxes if they live as expats in the U.K. They receive an automatic two-month extension, meaning they are due June 15th.

Expats in Scotland may get a free expat health insurance quote from our partner Allianz Care, whose plans ensure that you have access to quality healthcare whenever you need it. Allianz's flexible solutions allow you to tailor your cover to meet your needs and budget. Get a Quote

Expats in Scotland may get a free expat health insurance quote from our partner Allianz Care, a leader in international insurance for expatriates. Allianz's plans ensure that you have access to quality healthcare whenever you need it. Their flexible solutions allow you to tailor your cover to meet your needs and budget..

Meeting Other People in Scotland

An expat in Banchory, Scotland reported that "if you have children, the local primary & secondary school is a great place to meet other parents. Just as in the states, there is a Parent Teacher Association (PTA) that meets regularly. American Women in Aberdeen is also a social/support club that meets in Aberdeen. Aberdeen is approximately 20 minutes from Banchory. Aberdeenshire Council has also been very helpful in providing information on extracurricular activities for children living in the area. Banchory is home to many expats and the locals are very friendly and welcoming."

Yes - You Really Do Need A License To Have TV

One expat wrote that "in the U.K. there is a television license fee that must be paid if you have a TV in your home. I thought it was a scam when I received the notice in the mail. Luckily I had a neighbor that I was able to ask about the legitimacy. If you don't have a TV, they will make an appointment to come out to your residence to verify.

One expat recommended that "before you move, change your address to reflect your new Scotland address on at least one of your credit card statements. When you arrive, you will need to provide a statement with your Scotland address on it in order to open a bank account. If your spouse will also be on the account, he/she will need to have a statement that reflects the new address too. It took about a month after we arrived to open an account because we did not know this small detail.

Scotland is Scotland - It's Not The U.S., Canada or Australia

One expat advises American expats to adapt to Scotland and enjoy it. "Americans too often make a fatal mistake - they expect everything to be like the States - and it is not. You have to remember you came there for the adventure and change. Relish and enjoy it. The countryside is beautiful and filled with places to see and go and enjoy... The health system is socialized and at first it is confusing; but you just have to learn how to operate. UNDER NO CIRCUMSTANCES act like an arrogant Know Everything American. Revel in the new experiences and enjoy. It will be a joy to learn how to shop in small villages and how to use their public transport. My wife and I would move back quickly if the opportunity arose."

What Expats Should and Shouldn't Bring To Scotland

An expat moving to Scotland asked what to bring and not to bring, and another expat responded that she "would recommend a warm winter coat and waterproof outer clothing. If you have limited finances buy these items [before you move]. The exchange rate... makes it very expensive here. If you're not on a budget there are plenty of places to shop with lots of fun different brands.

"I would not bring any appliances from the U.S. to Scotland. They are different here and converters do not always work. Honestly it would be much better to purchase those things here. We use converters to charge our phones, iPad and laptop which work fine but that's about it. I'm not sure about furniture but if you're not really attached to it I'd purchase that here too."

Another expat added that "if you are going short-term I would take as little as possible. I would only take clothing and personal stuff you can't bear 2 part with.

Get a quote for expat health insurance in Scotland from our partner, Cigna Global Health.
Get a Quote 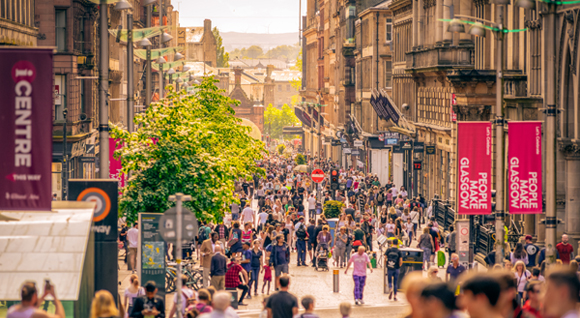 9 Things to Know Before Moving to Scotland

Here are 9 things to know before moving to Scotland from expats who have already moved there. Their advice covers topics such as the NHS, expat health insurance, village vs. city life, the high cost of living in Scotland, visas and much more.

Here are 9 things to know before moving to Scotland from expats who have already moved there. Their advice covers topics such as the NHS, expat health insurance, village vs. city life, the high cost...

What are the regulations about Service Dogs in Scotland? I heavily depend on my certified PTSD dog.

Get a quote for expat health insurance in Scotland from our partner, Cigna Global Health.
Get a Quote

Scotland Forum
Join our Scotland forum to meet other expats and talk about living in Scotland.

Expat in Scotland love traditional Scottish culture, beautiful landscapes and they experiences both combine to make possible. Be aware of the high cost of living, but if you come prepared you will always want to come back to this very special place. (more)

Here are 9 things to know before moving to Scotland from expats who have already moved there. Their advice covers topics such as the NHS, expat health insurance, village vs. (more)