8 Expats Talk About What It's Like Living in Bermuda

Summary: Expats talk about meeting people in Bermuda, how the high cost of living in Bermuda impacts the expat lifestyle, challenges for single expats and more. 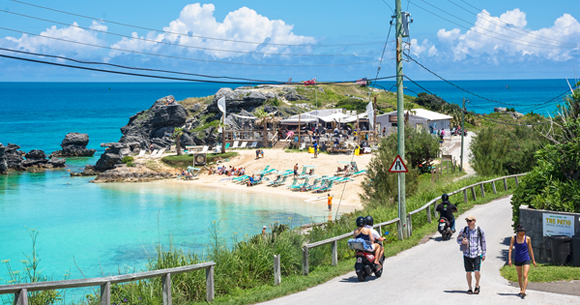 Expats say that Bermuda is great for families and couples who can afford the high cost of living, but others will find that living in Bermuda can be a challenge. Single people find that there is little dating scene. 8 expats share their experiences living in Bermuda:

"The American Club organizes events around U.S. holidays, and I believe it welcomes ex-pats from other countries; The International Women's Club (IWC) welcomes women of all ages from all countries. The IWC sponsors many events and is involved in philanthropic activities. It is a great group if you don't have to work and have a lot of time and money on your hands. The Bermuda Music and Drama Society (BMDS), is fantastic if you are artistic or creative. BMDS was my life line to sanity on many a lonely night on this dark island. BMDS sponsors many social events. You don't have to be talented in the arts, but it helps. I highly recommend this organization," suggested one expat when a newcomer asked how to meet people in Bermuda.

"Join a sports team (even as a social member). There are lots such as football, rugby, hockey. Go to Front Street where all the expats hang out in the bars," said one expat living in Hamilton, Bermuda.

"Women should join the Internation American Women's Club. It isn't just for Americans, and has members from all over the globe, mostly Americans, Brits and Canadians, and some Bermudians. And excellent way of meeting other women and finding out about everything you need to know in order to live on this surprisingly challenging (if beautiful) island. There is also a British Wives group. My advice - take it slowly and don't say anything to anyone you wouldn't want them to repeat," mentioned another expat in Bermuda.

"Defintely not the American Women's Club, they have stopped taking newcomers, don't even advertise any more. Best bet would be church, a sports activity or volunteering," commented one expat who made the move to Bermuda.

"Golf is a major way of meeting new people on this island as there an abundance of clubs, but be warned, they are expensive if you plan on making yourself a member of one. Otherwise, there is beach volleyball on Elbow Beach, or various other sports like running clubs etc. If you're not into sport, and are male, or a brave female, just turn up at The Hamilton Princess on Friday evenings in summer and get yourself a drink at Happy Hour prices and join the drunken crowds that populate that place. You'll soon meet new friends, only they may not remember meeting you the next day," remarked another expat living in Hamilton, Bermuda.

"I came to Bermuda with my wife and our two young daughters. I was working a lot although my wife started socializing through the MAMA group in which she made few very good friends," added another expat in Bermuda.

If you're thinking of moving as a single expat to Bermuda, one former expat cautioned, "Bermuda is very couple-y and family -oriented. There are a few bars but almost non-existent night life. The island shuts down on Sundays. There are organizations you can join such as the International Women's Club, but for the most part, I found it very difficult to meet people people, particularly men. I spent six months in Bermuda and was never lonelier in my life."

In a country where the cost of living is extremely high, it's not surprising that making money is a priority for most expats. Here's what expats in Bermuda had to say about it:

"People seem intent on making money. Bermuda is a nice place to visit but to work here as a white expat, you will encounter a certain amount of racism and resentment," said one expat living in Hamilton, Bermuda.

"Life revolves around the company you work for primarily, and the friends you make there through social events. Secondly sports associations (squash, golf etc.) and for ladies the American Women's Club and its events," mentioned another expat in Bermuda.

"I found family, religion and social events to be a very high priority to most people. Also, in this country where the cost of living is extremely high, finances (money) is also a priority to many people. Many Bermudians work two or three different jobs to make ends meet and to afford a house. I also found public holidays to be very important social and family events, especially Cup Match (2 day at the end of July, start of August). This one is probably more important than Christmas/NYE," commented one expat who made the move to Bermuda.

Get FREE quotes from up to 6 international movers from The Relocator. Save up to 50% on your move to Bermuda! The Relocator offers an easy and free service to receive quotes from renowned and certified movers worldwide. Get your moving quotes.

We asked expats about diversity in Bermuda and whether locals are accepting of differences. They said:

"Bermuda is ultra religious. They have a 'holier than though' attitude and people will be surprised if you are a non-church goer. They are very intolerant especially if you are white or gay. For a christian island they are very bigotted and racist," said one expat living in Hamilton, Bermuda.

"The blacks and the whites tend not to mix much socially, except perhaps in the churches. There is a quite noticeable level of resentment on the part of the blacks towards the whites, and the politics is uncomfortable at times, although not physically threatening at all," mentioned another expat in Bermuda.

"They are quite diverse. However, they do not embrace their differences, there is a lot of racial tension. The locals really dislike the expats," commented one expat who made the move to Bermuda.

"Unfortunately, Bermuda has a real need for expat, or " guest workers " as we are called, due to the island's tiny size and lack of locals to fill the jobs. Trouble is, they DON'T want us and waste no time making you aware of that, by articles in the local paper, The Royal Gazette, or by just plainly saying so. Make no mistake, you are NOT welcome," remarked another expat living in Hamilton, Bermuda.

"The is racism in Bermuda. Many do not like expats, but I personally found that the racism was even worse between black and white Bermudians. Still, all expats have their own stories and personally, I did not really experience intense form of racism. In terms of diversity, there are around 10,000 expats in Bermuda from all around the world, with a majority of British, Americans and Canadians. The sentiment Bermudians have towards these people is ambivalent as some think expats take jobs off Bermudians," added another expat in Bermuda.

Moving to Bermuda? Get a health insurance quote from our partner GeoBlue. Click here to speak with GeoBlue's Sales Team.

An expat in Bermuda talks about the high cost of living in Bermuda, meeting other expats, racial tensions and much more.

10 Tips for Living in Bermuda

Expats in Bermuda have mixed feelings about living in Bermuda. Everyone loves the sunshine and beaches, but the high cost of living, one car per household law, limited job opportunities and gossipy expat social scene can make life challenging.

Expats in Bermuda offer some excellent advice - and words of caution - about what it means to move to Bermuda. Housing, health care, basic tips and more are covered.

Yes it is very expensive at first, but if you are working locally you soon adjust your finances to match

Get a quote for expat health insurance in Bermuda from our partner, GeoBlue.
Get a Quote

Get a quote for expat health insurance in Bermuda from our partner, GeoBlue.
Get a Quote Call

Bermuda Forum
Join our Bermuda forum to meet other expats and talk about living in Bermuda.

Expats in Bermuda have mixed feelings about living in Bermuda. Everyone loves the sunshine and beaches, but the high cost of living, one car per household law, limited job opportunities and gossipy expat social scene can make life challenging.

Contribute
Help other expats and newcomers by answering questions about the challenges and adventures of living in Bermuda.

Expats in Bermuda offer some excellent advice - and words of caution - about what it means to move to Bermuda. Housing, health care, basic tips and more are covered.

If you're planning to move to Bermuda or spend a year there, it's important to understand the healthcare system, doctors, hospitals and emergency care.

Bermuda introduced the Work from Bermuda Certificate on August 1, 2020. They are inviting people to spend up to a year working remotely from the island.