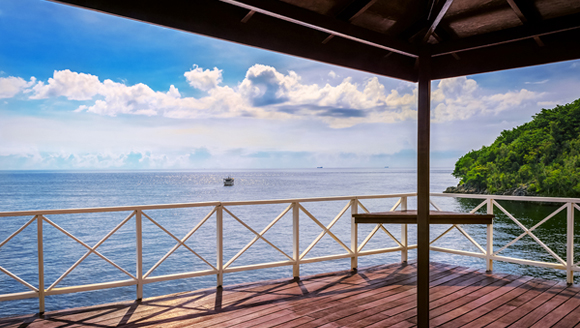 With its beautiful beaches, lush greenery and amazing climate, most people might think that moving to Trinidad & Tobago would be an easy transition. But, expats in Trinidad & Tobago caution newcomers about the difficulties finding employment, taking into account traffic when choosing where to live and the high cost of food.

"Think about your daily life and plan accordingly. Are you willing to fight traffic to live up in the hills or nearer to the beach? We weren't after doing that in California, so we chose a location close to our school and my husband's office. He has about a 15 min commute. We did bring our pets, a dog and two cats. You have to fill out forms, get permits and inspections, etc., and they were in quarantine (2 for 1 month, 1 for 3 months). It was expensive, but worth it for us. In dealing with the animal authorities, customs, and various bureaucracies, just remember to keep your cool and pay the man what he says you owe. It does no good to get mad or fight it. There's no computerization and things seem inefficient, but it's really just that Trinis value living in the moment and fun rather than time-management. The government seems designed to employ the most amount of people rather than building efficient processes. Dealing with the ministries was the hardest part of the move, but now that we're through it (we've been here 5 months now), I truly like living in beautiful Trinidad and especially the friendly, family-oriented culture. My kids have settled in, I'm happy with the school, and I've learned my way around town. Life is good, you just have to cultivate the right attitude," said one expat who moved to West Moorings, Trinidad & Tobago.

"We were limited to what the realitor wanted to show us, mainly West Morings. My husband talked to people at work (other expats and locals) and they told us about different areas. We insisted in viewing the other areas we knew of. (Like the US, realitors are looking at their best interest; not yours. They want to show you where they have rental properties, need I say more...) Secondly, Drive to work and back during your work hours once you find the area you like. Adjust the hours or the location depending on your choice. Everyone complains about traffic, but Houston's traffic is the same if not worse with 6 lanes on every road," mentioned another expat when asked about moving to Trinidad & Tobago.

"Laventille, Enterprise, Sea Lots, Blue Basin and some rural places are where you DON'T want to live. If you are brown, you will fit in anywhere. Try for higher ground because flooding is common on days of rain, but not where vegetation is missing because mudslides do happen," commented one expat who made the move to Trinidad & Tobago.

Deciding Where to Live in Trinidad & Tobago

When we asked expats living in Trinidad & Tobago to offer newcomers advice about choosing a neighborhood and finding a home, they replied:

"We were informed by an estate agent the areas where expats tend to live, the areas being West Moorings, Goodwood Park and Fairways Maraval. The Estate agents are very good although you will find that all agents know each other and tend to have the same properties on their listings," said one expat who moved to West Moorings, Trinidad & Tobago.

"My wife is a lecturer at UWI, so they set up all the arrangements before we arrived," mentioned another expat when asked about moving to Trinidad & Tobago.

"Researching prior to launch armed us with details on the neighbourhoods. Upon arrival we sought a realtor who confirmed that we belonged in the expat neighbourhood. It is crowded, and security is a common feature from the building, to the neighbourhood, to the grocery store, to the mall," commented one expat who made the move to Trinidad & Tobago.

"We chose Westmoorings since our kids attend the nearby International School - they can walk back and forth and I don't have to fight the traffic. Traffic can be ver congested, but it's usually at predictable times, so you can avoid it if you plan your travel accordingly. I do pick my kids up if they stay at school until dark, which is around 5:30 here every evening. Day length varies only about 20 min in the course of a year since we're so near the equator," remarked another expat in West Moorings, Trinidad & Tobago.

"We do not have children going to the international school, so that opened our options where to live. We chose Moka, Maraval by the golf course. It's green and mountainouse. It's a 10 minute drive to the city or a 15 minute drive to the Carribean, Maracus Beach. The houses are newer and larger. You get more for your money. **Fresh Fruit / Vegetable stands on corners. You won't find that in West Morings," said another expat in Trinidad & Tobago.

"I looked everywhere and found a gorgeous home in a gated community with NO EXPATS and all upper crust Trinis," remarked another expat who made the move to Trinidad & Tobago.

"I wish we had brought more sheets, hangers, and rugs - things like that and dishes and towels are super expensive here. I didn't need to bring pharmacy items such as acid-reducers, shampoo, bath items - pharmacies here are very well stocked and you can get things more easily than in the US! I also wish I had brought more items for my pets - food and other items are hard to find and expensive," said one expat who moved to West Moorings, Trinidad & Tobago.

"Originally we were supposed to have a furnished home... With that in mind we packed enough for 2 weeks to live in a hotel. There's not much we brought that we shouldn't have. Things that I wish I would have brought... 1) Bedding: If you like 1000 count sheets like I do, they are hard to find. If you find them they are expensive and not the quality as the ones in the states. Plus, bedding sets are hard to find and there is no variety. 2) Summer clothes: Clothes are expensive and everything looks the same. You pay about $50 US for a sun dress that you would buy for $15 - $20 US. 3) Spices: You are limited to local spices and seasonings. Some grocery stores sell imported items, but you are limited to what they provide," mentioned another expat when asked about moving to Trinidad & Tobago.

"WIFI Extender (homes are concrete), Hoodies, Sweaters, Jackets for indoors, Tech Gadgets," commented one expat who made the move to Trinidad & Tobago.

Get FREE quotes from up to 6 international movers from The Relocator. Save up to 50% on your move to Trinidad & Tobago! The Relocator offers an easy and free service to receive quotes from renowned and certified movers worldwide. Get your moving quotes.

Finding a Job in Trinidad & Tobago is Very Challenging

Finding a job in Trinidad can be a huge challenge for a foreigner. "Trinidad Law does not permit non residents to work for more than 30 days without a pre approved work permit. Typically if you have a skill which is in high demand, or a unique skill which no other national can provide your sponsor (employer) will receive the work permit on the condition that during the duration of the work period, a national is trained to carry on the duties when the permit expires," explained one expat in Trinidad.

"I would suggest you do a trial period of 3 months. Your US passport will allow you to stay 3 Mo at a time. As far as working, it will not come as easy as you think. I have a friend in TT with a phD struggling to find work. The economy isn't strong, and it's all about who you know. Also, you would have to apply for a work permit, which is a waste of time. In order to receive a work permit, an employer has to prove there isn't a native capable of doing the job," cautioned an expat living in Trinidad.

"Most people are transfered in with their respective company. Generally local salary is not sufficient for an American lifestyle. Finding a local job and going on local payroll would be a challenge to say the least," said one expat who moved to Port of Spain, Trinidad & Tobago.

"Trinidad being right next to Venezuela, basically runs on Oil. So there are many expat's working here for many foreign companies," mentioned another expat when asked about moving to Trinidad & Tobago.

An Expat Talks about Moving to Carenage, Trinidad & Tobago

An expat in Trinidad enjoys a lower rents in big house that's located a nice, gated community that doesn't cater to expats. He advises newcomers to look for houses on higher ground, because flooding is common.

Cost of Living in Trinidad & Tobago

Expats offer insight into the cost of living in Trinidad & Tobago.

Our guide to moving to Trinidad & Tobago with lots of advice from expats on the ground.

Contribute
Help other expats and newcomers by answering questions about the challenges and adventures of living in Trinidad & Tobago.