Summary: Expats in Colombia talk about what it's really like living there - deciding where to live, the pros and cons and more. 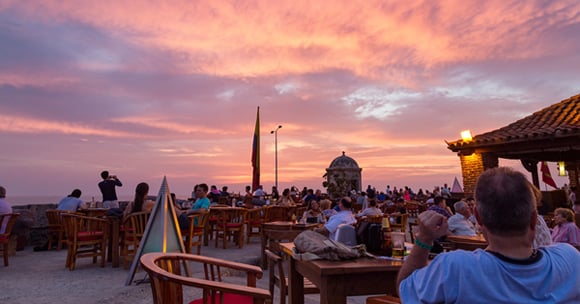 Deciding Where to Live in Colombia

When we asked expats living in Colombia to offer newcomers advice about choosing a neighborhood and finding a home, they replied:

"Several American friends live in the cartago-cerrito-alcala-quindio areas. Just outside cartago is a paradise. The Cerritos or Quindio areas i think is one of the best places in the world to have a ggod life. A little bit expensive but you can have great choices from $100k to $300k. Several acres, swimming pool, everything you did not have in the USA. or if you want you can buy a house in el prado neighborhood for $70k. Fantastic," said one expat living in Cartago, Colombia.

"Found Medellin from a friend - climate is perfect 75 days, 65 nights for sleeping(other cities climate can be much colder), good infrastucture equal to USA (drinkable water - no bottled water, low cost hydroelectric, same voltage - no convertor, natural gas in ground) and products / services (from USA, we are very accustomed to finding everything we want) and the people are very friendly / helpful Find a good English speaking real estate agent (Andrew - Apartments Medellin) because they will generally understand also more of your needs. The local agents tend to help their friends and do not show what you will want (no MLS services here). Look for US designed and constructed housing or you will miss all your conveniences (from experience)," mentioned another expat in Colombia.

"Traveling through Colombia i stumbled upon a town called Guatape 1 hour from Medellin," commented one expat who made the move to Colombia.

"I visit the area many times and was in love with the Cerritos, Cartage and Quindio area. This area is safer than the USA," remarked another expat living in Cartago, Colombia.

We asked expats in Colombia what they appreciated about their new culture. Here's what they had to say:

"Everything, especially how Colombian deal with relationships. Since relationships are so close, and everyone talks, there's more gossip. But in the end people do care and want to help any way they can," said one expat living in Villavicencio, Colombia.

"Family, this is something that for the most part does not exist where I am from. Watching a family all holding hands as they walk," mentioned another expat in Colombia.

"The new culture is invigorating, energetic, exuberant, fast-paced, challenging and exciting. I so needed a change from Hawaii where I had become bored and complacent. The people are very sincere and helpful. They are happy and easy-going and really know how to have fun. The family unit is so close and includes most of the family tree, all of whom go to church together, visit each other frequently, even travel together. Most U.S. families that I know are no where near as close knit as those of the Colombian culture," commented one expat who made the move to Colombia.

The Most Challenging Aspects of Living in Colombia

Then, we asked expats in Colombia what was most challenging about their new culture. They replied:

"I have the American sense of time ingrained in my very soul. I am really struggling to accept that things don't always happen when I want them to. I purchased a refrigerator that was promised to be delivered the next day at 4pm. 4pm came and went with no refrigerator being delivered. I then called the company and they assured me that it would be delivered by 8pm that night. Again, it was not. This pattern continued for several more days, until it was finally delivered. It didn't HURT me to wait, but was extremely frustrating for me," said one expat living in Pereira, Colombia.

"The language is a problem but of course it become less as I learn. One must be very careful as to where you go do to the problems of crime," mentioned another expat in Colombia.

"Men have no respect for women, and as a result the women have become cold and indifferent in many ways. It is a shame," commented one expat who made the move to Colombia.

"The challenges for me are getting a better grip on the language, making friends, learning to pace myself, and being patient and tolerant. I don't want to be over-dependent on friends but at the moment I don't have another choice. My biggest challenge will be finding a suitable place to retire in this beautiful country that has so much to offer. And being a single woman without any family making this journey makes me feel very much like an odd ball," remarked another expat living in Bogota, Colombia.

"The most challenging may be that she is Catholic and I am Christian. But Saturday is my Church day and Sunday is hers so we can work that out," added another expat in Colombia.

"Crime... people are concerned for me in Colombia & ask me this all the time. MY ANSWER? If you keep your nose clean & KNOW where you should or should NOT be? You wouldn't have any more problem then you might have here in the states. I'm sure there are places where YOU live that you KNOW to stay away from, or NOT go there after dark. AND of course, you get into "shady" things... you'd have a problem here too," said one expat living in Cali, Colombia.

"Medellin is like any big city; it has its share of crime. But statistically, it ranks safer than many US cities. Much less gun violence than in the US," mentioned another expat in Colombia.

"People talk about it, especially on the Facebook groups. But we never see it, and we feel very safe," commented one expat who made the move to Colombia.

"Your child would be in good hands at this school. No specific advice. There's not a strong Spanish as a second language program at all though, so this would have to be arranged. Most classes are in English although at the HS level there are several teachers who teach in Spanish," said one expat whose children attend Colegio Bolivar in Cali.

"It will be a very difficult decision to make since this is the only international school in Medellin. My advice: try to visit other schools, that don't have strong bullying problems (you can still find some like Montessori and Cumbres). Your children will be safer and happier," added another expat with kids at The Columbus School in Medellin.

"Do seriously consider this school, especially if your child is from an English- speaking country. Almost all of the Secondary teachers are native English speakers from Australia, the UK, the US, etc., so the school's English programs are top-notch. The teachers are stellar, the academics challenging, and the community welcoming and diverse," commented one expat when asked about Colegio Gran Bretaña in Bogota.

"Be aware that the presentation of the school is excelent and the school promise a lot of things that are not true. It is a regular academic school with a nice campus," remarked another expat living in Colegio Bolivar with children attending Colegio Bolivar.

"Colombia is known for its high quality of private medical care and medical universities. Bucaramanga is well known for medical education and we have a plethora of hospitals and doctors. In my experience, prices are much cheaper here than the USA. eg. ACL surgery in the USA can run $60K to $80k, not including physical therapy. ACL surgery here is $5k including physical therapy," commented one expat living in Bucaramanga, Colombia.

An expat living in the mountains outside of Palmira, Colombia talks about the culture shock she experienced moving to Colombia.

An expat living in the mountains outside of Palmira, Colombia talks about the culture shock she experienced moving to Colombia.

An expat living in the mountains outside of Palmira, Colombia talks about the culture shock she experienced moving to Colombia. ...