Summary: Expats, digital nomads and retirees discuss what it is like to live in Limassol, Cyprus: Cost of living, Finding a home, Meeting People and more. 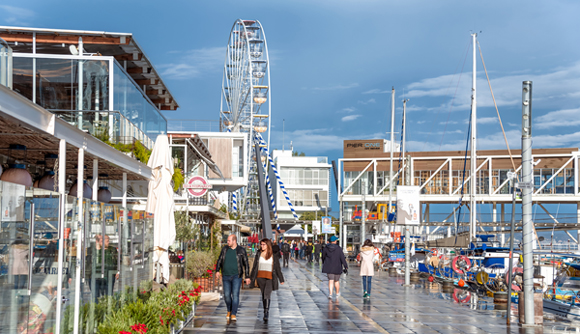 What do I need to know about living in Limassol?

When we asked people what advice they would give someone preparing to move to Limassol, they said:

"Be prepared to have sufficient funds to last for up to 2yrs without an income. The initial setting up costs can be quite expensive as white goods are not cheap because everything has to be imported. Rent a property first to find the right location in line with work. A lot of offices or shops work "split shifts" so you are expected to go home for a couple of hours at lunchtime then go back and work till possibly 8pm during Summer hours. Salries cannot be compared to UK at all and a good salary of CYP 600 or 1025pm is not so easy to come by. You may be expected to work 40hrs a week and for that on split shifts, sometimes working at weekends with a half day off mid week. Second hand cars hold their value really well in Cyprus so are not cheap to purchase and there is a lack of public transport - except along the main tourist road. A car is a necessity and Cyprus is not the place to come if you do not or are not willing to drive. Traffic can be horrendous during the weekly rush hour and we have at least 3 rush hours per day. Be prepared to sit in your car over lunchtime rush hour in temperatures of above 40 degrees! Winters are fairly short, starting in January till March but lack of insulation in the properties here mean you freeze in winter and boil in summer. Also, the humidity in July & August is VERY sweaty! Government office usually close for 2 weeks in August due to the heat when most workers escape to the mountains to cool off. Electricity costs are comparable to those in UK, but we get free hot water for about 9 months of the year from the solar systems. Telephone calls are extremely cheap, although internet or broadband service is more expensive than UK and many other European countries. Currently there is a real monopoly on the telephone service provider but slowly, things are changing and more competitors are coming in. Don't expect everything to happen overnight because it won't. There is a saying in Cyprus "siga, siga", which means "slowly, slowly" - believe me, it is very true! But that is why we chose to come to live here in the first place. We have a much more relaxed lifestyle and less worry, financially or otherwise than we ever had in UK. It isn't a place to come to if you have a get rich quick attitude. But, if you are comfortably off with some funds behind you and are prepared to work or change your worklife balance, leading a simpler lifestyle - then this is definitely the place," explained one expat living in Limassol.

How do I meet people in Limassol?

When we asked people living in Limassol about club and activities where newcomers can meet others, they responded:

"Join online forums such as BFC Trading Post Cyprus Limassol Living and also Cyprus-AngloInfo as they are full of information - before you move to Cyprus. We also have the UKCA club in the town which is frequented by UK ex-pats. If you are an animal lover, there are loads of sanctuaries that are seeking voluntary help and we also have the Samaritans who regularly need assistance," explained one expat living in Limassol.

Will I be able to find a job in Limassol?

When we asked people about industries and career opportunities in Limassol, they reponded:

"Limassol is a working city in its' own right and therefore does not survive on tourism alone. Major shipping & insurance companies are located in the city, all kinds of offices for property and building, lawyers etc. Also shops, restaurants, bars, hotels with all kinds of nationalities employed there," remarked another expat in Limassol.

"Shipping and Insurance companies offer all kinds of opportunites, as does the tourist and hotel industry along with a major port facility. We have large beer factories and bottling plants on the outskirts of the city, lots of estate agents offices, shop and office work as well as manual labour such as builders, labourers and warehouses etc. Most jobs are advertised in the local newspapers, forums and Government job centre as well as private job centres/recruitment agencies. Also, because it is a relatively small island, many people find jobs through word of mouth," explained one expat living in Limassol.

When we asked people living in Limassol what life is like and how people spend their time, they said:

"Limassol is in the centre of the island, so is ideal for access from both airports and makes it an easy place for visiting the East & West coasts within a 2 hour drive to visit Ayia Napa (if that's your cup of tea). Limassol is probably the most cosmopolitan city in Cyprus and there are many nationalities living & working here. It's the hub of numerous off-shore companies and also the main container shipping port. Cruise ships come into Cyprus via Limassol new port. It's a city that covers a multitude of things so yes, it's a living & breathing city for work or play. With a long tourist sea front covering almost 12km nobody can complain they are short of things to do," explained one expat living in Limassol.

Is there a lot of diversity? Are people in Limassol accepting of differences?

"The ethnic groups in the town range from Greek, Cypriots, UK citizens, Sri Lankan, Phillipino, Russian, Polish, Croatian and Ukraine, etc The Cypriots mostly follow the Orthodox religion, so Easter does not always fall at the same time as UK Easter. There are still Turkish mosques here even after the Turkish invasion of 1974. It's a multi-racial city and fairly accepting of others views and beliefs," remarked another expat in Limassol.

Get a quote for expat health insurance in Cyprus from our partner, GeoBlue.
Get a Quote

Get a quote for expat health insurance in Cyprus from our partner, GeoBlue.
Get a Quote Call

Contribute
Help other expats and newcomers by answering questions about the challenges and adventures of living in Limassol.

Information about healthcare and hospitals in Cyprus.

Expats Talk about Living in Limassol

Expats talk about what it's like living in Limassol, Cyprus: Cost of Living, Healthcare and What Newcomers to Limassol Should Know

Get a quote for expat health insurance in Cyprus from our partner, GeoBlue.
Get a Quote

Get a quote for expat health insurance in Cyprus from our partner, GeoBlue.
Get a Quote Call

Guide to Living in Limassol, Cyprus

Limassol, Cyprus: Cost of Living, Healthcare and What to Know About Living in Limassol

Contribute
Help other expats and newcomers by answering questions about the challenges and adventures of living in Limassol.

Information about healthcare and hospitals in Cyprus.

Expats Talk about Living in Limassol

Expats talk about what it's like living in Limassol, Cyprus: Cost of Living, Healthcare and What Newcomers to Limassol Should Know