Summary: Expats in Qatar share their tips for living in Qatar. From school wait lists to life for single expat women, expats open up about the challenges and rewards of life in Qatar.

"I have encountered a richly diverse expat community very well versed in international travel and knowledgeable beyond my wildest dreams. They are also passionate and are here seeking opportunity and advancement, I understand that for myself and my family," described one expat living in Doha.

"Let your wife know about Doha Mums (http://www.dohamums.com), too. We have an average of 70+ events per month, and our members have kids ranging from infants to high schoolers. You can reach me (or our group mentor) through the contact page of the website, and feel free to call me when you get here at 692-5699," recommended one expat mom.

"Meeting people outside of those you work with, is not easy, but as far as entertainment, there is always something going on, you just have to search things out. Plenty of sports groups you can join and the Katara Cultural Village always has performances, exhibitions, etc. I've already been to a few things there," suggested one expat in Qatar.

"I have enjoyed the little things like no taxes, easier working hours, travel opportunities, enriched family time, cultural exposure, health access and affordability are some of the advantages," said one expat in Doha. Another said, "It is completely safe. Safer than the USA. The crime rate is very low and the locals are friendly. If you can manage the driving (crazy people! lol ) You'll be completely comfortable here and could make a nice life. Dating is the only road block I have come across, but other than that, it's a great place."

3. Getting a Residency Permit in Qatar

"It's been harder in terms of the very intricate and bureaucratic red tape to get a residency permit including a blood test, health exam, and criminal clearance--all this to get internet at your house. Without a resident permit (RP) you can not do anything so the first couple of weeks it's very rough as you have very little ways to connect other than the phone. There are hardly any or none internet shops, do it yourself laundry, or Fedex-Kinkos in Doha. We almost turned right back around, but once you have the RP things do get better," explained one expat.

4. Choosing Where to Live in Doha

"Your best bet is to secure your son's schooling first and then look for housing - the former is much more difficult than the latter. The traffic in Doha is a real drag, and your wife will not be amused if she has to trek across town twice daily - just trust me on that one :)

"Cost of living is high. For expats like you, you would prefer to live in areas such as the West Bay or The Pearl. 1-Bedroom apartment (semi-furnished) that area should cost around QR 10000 / per month," advised one person in Qatar.

"You'll want to look at Doha College (if they take non-UK passport holders) and the American School. Doha Montessori (not actually a Montessori school) and Compass International School (Rayyan campus) might offer high school by the September term, too. Schooling is not cheap here - plan to spend >QR50,000 per year. You will want to apply ASAP (as in now) because there are many expats leaving and you'll want to be on the waiting lists. If he doesn't get in this fall then there is also an active homeschooling group here in Doha - if you google "doha home educators" it should pop up," advised one expat mom in Doha.

"Driving is horrible, absolutely insane and very aggressive behavior on the road is not conducive for safety on the roads. Driving and schooling both almost impossible," warned an expat in Doha.

Another said, "I don't speak Arabic but do plan to learn a few words so that i can give a piece of my mind to the wreckless drivers as the police never ever does justice and finds a way to blame the foreigners in Doha. We end up paying the price for not learning Arabic."

"There was the honeymoon phase: big salary, big adventure and then reality set in with all the daily irritations: disturbed sleep from the mosque next door, high humidity and heat, shops closed on a whim, hair raising traffic and drivers, over priced goods,etc. The realisation that it was not Arabic I needed to learn but at least two Indian languages to be able to communicate with the plumber and the delivery man. Taking short holidays to nearby European destinations helped me and eventually it dawned on me that I had been there two years and was actually enjoying it," described one expat who moved to Qatar.

8. Learn to Slow Down in Qatar

"If you move to the Middle East learn to chill out. Nothing happens quickly. If you ask for something to be done find out when. Their sense of time is really very different from what we are use to in North America. Yah, Yah, Yah does not mean anytime soon," advised one expat living in Doha, Qatar.

9. Having a Baby in Qatar

"Al Ahli hospital. It was amazing. I was in for 3 days. My Dr was Dr. Daniz Ihsan. She monitored my entire pregnancy and the birth. When I went to deliver (with the eipdural), my daughters heart was slowing and she sat with me 100% of the time watching. Al Ahli is like a hotel (complete with bell boys). it was great. Private room, great nurses and everything. Expensive but insurance paid almost 80%," said one expat mom who had a baby in Qatar.

"From the single women that I have met it does seem that it is difficult to meet people. You will need to be very proactive about it, and be prepared to meet a heap of married people in the process. You'll want to sign up for classes, clubs, events and whatever else you can do to meet others. I won't lie: if you want to date then I do think it will be difficult (and also illegal). There are women who have met their husband here, but I wouldn't say that it is commonplace. It is also not particularly common for a foreigner to marry a Qatari - nor is it looked upon favorably by Qatari women, who (I'm told) will pretty much shun you. I have two friends who married Qataris and wear the abaya and they said they get dirty looks everywhere they go. The main social life for singles seems to take place in the hotel bars/clubs, and there are certainly more men than women. However, quantity does not necessarily equate to quality - yikes. I've heard quite a few stories about the cheesy, desperate men in the bars. The Arab men who go to the bars will definitely seek you out, which I have heard can be very overwhelming. A friend told me that she was in a bar speaking with a male friend and one of the local guys pretty much barged in and took over the conversation with her. (No, the Qataris are not supposed to be in bars/clubs but they frequently are)," explained one expat living in Qatar.

Another expat woman in Qatar said, "I am a single woman who has lived in Qatar for nearly a year. I don't go to bars, and have never been harrassed by any man here in Qatar. If you dress respectfully, covering shoulders, elbows and knees, you will be treated with respect. Workers will look at you, but not approach or talk to you. (Their wives are far away.) I'm not sure this is the place to come if you want to meet a man, though. I have made friends, male and female, in my compound, at work, etc."

Get a quote for expat health insurance in Qatar from our partner, Cigna Global Health.
Get a Quote

5 Tips For Living in Doha, Qatar

Expats in Doha live among a very large expatriate population. For first time expats in Doha, it can be challenging to adjust, while more experienced expats say the city and the country of Qatar is a manageable adjustment.

Expats in Doha live among a very large expatriate population. For first time expats in Doha, it can be challenging to adjust, while more experienced expats say the city and the country of Qatar is a ...

Get a quote for expat health insurance in Qatar from our partner, Cigna Global Health.
Get a Quote

Qatar Forum
Join our Qatar forum to meet other expats and talk about living in Qatar.

Expats in Qatar share their tips for living in Qatar. From school wait lists to life for single expat women, expats open up about the challenges and rewards of life in Qatar. (more) 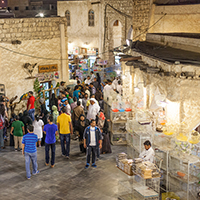