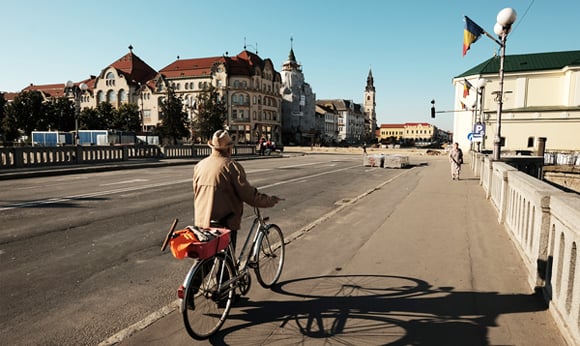 An expat describes life in Oradea, which is about 15 minutes from the border to Hungary. Many of Oradea's almost 200,000 residents speak both Hungarian and Romanian.

No. I didn't think it will be necessary but I was wrong. I could of used more information etc.

Moving to Romania? Get a health insurance quote from our partner GeoBlue. Click here to speak with GeoBlue's Sales Team.

Yes! Oradea is only about 15 km from the Hungarian border and it used to be a Hungarian town so many signs are in both Romanian and Hungarian. The population of the city is heavily dual speakers!

No! Not too much. I figured it is in Europe and the adjustment won't be too bad.

Get FREE quotes from up to 6 international movers from The Relocator. Save up to 50% on your move to Romania! The Relocator offers an easy and free service to receive quotes from renowned and certified movers worldwide. They only work with qualified moving companies. Over 500 movers worldwide have already joined their service to help you get the best price and service for your international move. Get your moving quotes.

The culture shock was gradual in my case. Since I spoke some Hungarian and English of course I didn't think it will be a big deal. In Oradea that was mostly true but as I explored deeper in Romania it was a different story!

Yes I suppose you can say it was gradual. The reality only hits you after about 2 or 3 months when you have to deal more with bureaucracy and the authorities by enlarge. Should note that in Oradea there is a fairly new requirement that ALL government offices have to have a Hungarian speaker on staff. Also many Romanians do speak at least a few words.

Definitely some of the "homesickness" was going on, LOL! For me it took more than 6 months to decide if I made the right choice. Still not sure if I should move one country to the West or what!

Romania has come a long way and at least from what I seen is very "westernized"! Many speak at least two languages unless you deal with the less educated or the country folks.

Romania is seen and I think rightfully so as a "corrupt" country. The fairly new president is trying to change that but he is getting a lot of resistance.

Embarrassing yes! I tried to ask a man for directions that was facing the building. I only realized that he was "relieving" himself so when he turned around zipping himself up I forgot what I was going to ask him! LOL!

Please read up on your country of choice. Do a little historical search. Find out what the education level is and what languages are spoken. Find out about the politics, ethnic differences and bureaucracy of the target country. The talk with some expats on line and in my case with some Romanians living in the US. It will be time well spent!

Talk with Expats in Romania

If you're not involved in our Romania Forum, it's a great place to meet others in your area, get answers to questions about moving to Romania or offer advice to a newcomer.

10 Tips for Living in Romania

Expats in Romania share their tips for living in Romania. They discuss the pros and cons of living there and offer advice about driving in Bucharest, finding an apartment and more....

Expats moving to Romania, should read this article that covers healthcare, best places to live, culture shock, and much more. ...

Get a quote for expat health insurance in Romania from our partner, GeoBlue.
Get a Quote

Get a quote for expat health insurance in Romania from our partner, GeoBlue.
Get a Quote Call

Romania Forum
Join our Romania forum to meet other expats and talk about living in Romania.

Contribute
Help other expats and newcomers by answering questions about the challenges and adventures of living in Romania.