12 Tips for Living in Montreal, Canada

Montreal boasts a rich cultural heritage, numerous employers and food that rivals many of the great cities in the world. Here are several things to know before taking the plunge and moving there, whether you're trying to bolster your career path or looking for unique retirement options.

Montreal is an international city that attracts people for a variety of reasons. Montreal's economy is the second largest in Canada.

As far as expats that move there for work, the largest industries include aerospace, electronics, pharma, printed goods, software, telecom, textile and apparel manufacturing, tobacco, petrochemicals, and transportation.

According to CanadaStop0100, Montreal's top employers include such international heavyweights as Bristol-Meyers Squibb (Jobs), Sandoz Jobs, Dassault Systemes (Jobs, and many, many more.

There are retirees who will spend part of the year in Canada (U.S. expats who live there up to 180 days can be there without the need of a visa) - visit Travel.State.Gov's Canada Page for more information). Montreal, and other places in the Province of Quebec and its rich French heritage, such as Quebec City, have a lot to offer in terms of cultural experiences for expats.

Cost of Living in Montreal, Canada

Montreal Hash House Harriers describes itself as a "drinking club with a running problem."

Burgundy Lion is a pub and local favorite place to watch football (soccer) and rugby. Stop in, hoist a pint and you'll rub elbows with a lot of expats and others that can steer you toward just the right athletic club and much more.

The is also the Montreal Rowing Club

There are lots of privare school options in Montreal, so you'll need to do your homework to settle on the best one for your kids and your family. Remember that your kids'school can be a huge lifeline in terms of meeting people and establishing a network of friends. Note that students that are not Canadian citizens typically cannot receive English-language instruction at public schools in Quebec.

Here are some of the options and brief descriptions as found on their websites:

We visit Marches Public Market, specifically the Jean-Talon Market. It has so many fresh and freshly-prepared options. You can eat there and then bring home all kinds of wonderful culinary delights. We had delicious crepes that happened to be gluten free, some fresh sausage. Just shopping at this market may make you feel like you're living a vibrant, fulfilling, and healthful lifestyle.

Many people have cars in Montreal... there is on-street parking, and you can get a parking permit sticker for your neighborhood.

Bike sharing is available seemingly all over the city.

Here is an introduction to the Montreal's transportation system... it includes the Metro, a subway system, and a network of bus lines.

Here is the official website of the Metro and the bus lines.

The summers can be warmer than you would think, fall and spring are great though too short, and the winters are exactly what you would expect in the Great White North. COLD! 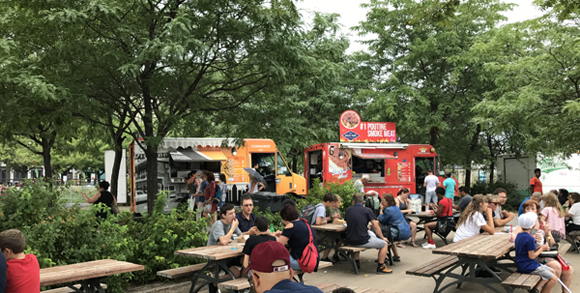 Oh the food! The restaurants in Montreal, with their French influence will just about knock your socks off. There are plenty of Italian, Asian and all kinds of other ethnic restaurants that just about make life worth living!

You'll need to definitely visit Old Montreal. Is it a bit touristy? Sure, but the restaurants and charm will easily win you over.

Our favorite restaurant in Montreal is Modavie in Old Montreal. In addition to a great atmosphere with live music, we have received excellent service and the food is fabulous. Try any of the salads, the Braised Lamb Poutine, and the Steak Frites.

Health Care in Canada is a publicly funded health care system that is organized through the provinces and territories of Canada.

You can find extensive information about immigrating to Canada on their official website.

There is a program where you may be able to apply as a Quebec Skilled Worker.

Contribute
Help other expats and newcomers by answering questions about the challenges and adventures of living in Montreal.

Expats offer advice about everything you need to know before moving to Montreal: what to bring (and what to leave behind), how to find housing and more.

Advice about renting and buying real estate in Montreal

Expats Talk about Living in Montreal

Expats talk about what it's like living in Montreal, Canada: Cost of Living, Healthcare and What Newcomers to Montreal Should Know 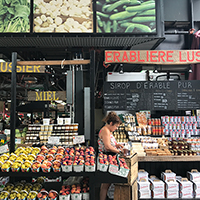 12 Tips for Living in Montreal, Canada

Montreal boasts a rich cultural heritage, numerous employers and food that rivals many of the great cities in the world. Here are several things to know before taking the plunge and moving there, whether you're trying to bolster your career path or looking for unique retirement options.

Guide to Real Estate in Canada

Advice for people renting and buying real estate in Canada.

Expats, digital nomads & retirees talk about what it's like living in Montreal.

Montreal Index
An index of all of our site's Montreal information.

Canada Forum
Talk with other digital nomads and expats in Canada on our Canada forum - meet people, get advice and help others.

Contribute
Help others in Canada by answering questions about the challenges and adventures of living in Canada.

Real estate listings in popular cities and towns in Canada.

Pros & Cons of Living in Canada

Take off your rose-colored glasses and learn what digital nomads & expats have to say about the biggest challenges and the greatest rewards of living in Canada.

Canada's technology sector has expats.all over the world looking there for career opportunities that are available to those who meet the proper criteria. The Canadian government has created a program to help expats.make it happen, and thousands are every year.