Summary: Switzerland is a country rich with tradition, natural beauty and one of the most stable economies in the world. It is, however, also extremely expensive and expats often report difficult settling into the culture.

General Information About Switzerland for Expats

Switzerland is a landlocked country in Europe. It is bordered by Italy to the south, France to the west, Germany to the north, and Austria and Liechtenstein to the east. Technically, there is no capital of Switzerland, though the federal government is based in Basel.

Switzerland is renowned for its policy of armed neutrality, which means it will not take sides in any war, but maintains a strong military to deter any hostile nation or other group.

Here is the breakdown of the four official languages of Switzerland: More than half of the Swiss speak German (63%), a little less than a quarter speak French (23%), Italian speakers comprise (9%) of the population, and Romansch is less than 1%.

While Switzerland is part of the United Nations as of 2002, it is NOT a member of the European Union.

Get FREE quotes from up to 6 international movers from The Relocator. Save up to 50% on your move to Switzerland! The Relocator offers an easy and free service to receive quotes from renowned and certified movers worldwide. Get your moving quotes.

Cost of Living in Switzerland

Gear up, because the cost of living in Switzerland is among the highest in the world, particularly in Zurich and Geneva. Expats complain about the high cost of living there constantly.

One way to help mitigate the cost of living in Switzerland is to reside outside the major cities. The public transportation is excellent if you'll need to commute into the city, and the savings can be quite substantial.

One expat wrote that, "It is SO EXPENSIVE to do anything. Quite simply on the whole I only walk in the country side ( when the weather is good enough) and use the trains, unless you are on a huge expat package then you will feel really poor here."

Another expat in Olten advised others that, "Switzerland is expensive. In particular, medicines, health care and body care products are very expensive. Many Swiss buy them abroad (in Germany) whenever possible."

An expat in Geneva wrote that "You have to by law have medical insurance and they trace you and demand it - I delayed and had a threatening letter about a fine- they trace you as you have to register with "population controle cantonal" - and maybe you will also have to show this to rent a flat! I did for my last one. This is Expensive even for the most basic ( you will still have to pay costs on top if you visit a doctor. An EU medical card is not valid if you work here. 500CHF a month for basic. (Another dint in what looked like a great salary.)"

Expats will need a specific Swiss visa for any stays longer than 90 days.

Schools for Expats in Switzerland

An expat in Zurich wrote that "Aside from trying to adjust to a Continental move, the public school system gave me the most grief. I would suggest a person read up on how it works in Switzerland before deciding to put your children into their system. If you don't like it, or it's not a good fit for your child or children, it's almost impossible to move them to the private school system even with the money for tuition."

An expat in Basel advised others to "make sure you visit the apartment first and bring your U.S. furniture with you and as much U.S. things as possible to save yourself money. Be careful about furniture fitting up stairways. Be careful about silly rules...no flushing of toilets or taking showers during certain hours, etc."

She shared that she lived in "A multi-level city apartment in the center of town," and that it was not a typical situation for expats. She added that "it is hard to find an apartment like this. They are highly desirable and usually are taken by Swiss citizens." Lastly, she wrote that she had "used a relocation agent who showed me multiple neighborhoods and described pros/cons and I then asked colleagues what they thought and went for their recommendations."

expat who moved just outside of Zurich wrote that he lives in a Share farm house. And no, I don't think this is normal, but it suited me very well. I think most expats would prefer the city. It was a share farm house with 2 blokes. However, take on board that public transport is very reliable and comfortable in Switzerland. Much better than my own country.

An expat who moved just outside of Zurich shared:

"Moving to this area offers a great lifestyle plus easy access to city (Zurich). This is a small, peaceful village - with a lake. Has basic ammenities eg. post office, Migros, Newsagent, Fab Doctors, Clinic, kindergarten, school. Nearest major shopping centre is Volketsville or Uster. (10-15 mins either side of G/see). Accommodation is limited and best to try early in year and mid year as these are the main times for change of leasing."

An expat in Oltenwrote that "Switzerland has the best public transport system of Europe, and one of the best of the world. Living without car may be very well possible for you in Switzerland - consider this when you plan to import a car."

An experienced expat in Zurich had trouble adjusting to the realities of life there.

Expats Talk about What it's Like Moving to Switzerland

Visit our Switzerland Forum and talk with other expats who can offer you insight and tips about living in , Switzerland. 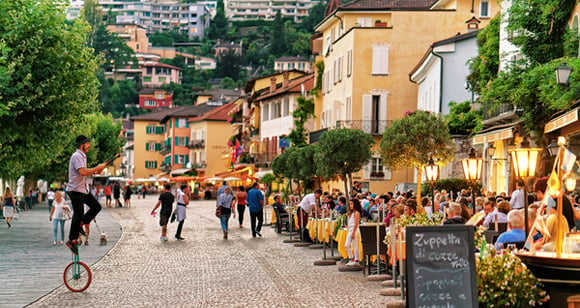 14 Expats Talk about What It's Like Living in Switzerland

10 Tips for Living in Switzerland

Advice from expats in Switzerland on housing search, finding a job in Switzerland, international schools, expat clubs and organizations, learning the language and cost of living. A must read for newcomers and anyone moving to Switzerland.

Advice from expats in Switzerland on housing search, finding a job in Switzerland, international schools, expat clubs and organizations, learning the language and cost of living. A must read for newc...

5 Tips for Living in Zurich, Switzerland

Expats in Zurich, Switzerland find themselves in one of the most important financial centers in Europe, and the world. While they are treated to a city with many English speakers, it can be difficult to find good housing... and friends!

Expats in Zurich, Switzerland find themselves in one of the most important financial centers in Europe, and the world. While they are treated to a city with many English speakers, it can be difficult...

5 Tips for Living in Zug, Switzerland

Zug, Switzerland is a beautiful city and very popular among expats. 30 minutes south of Zurich, this low-tax region is home to numerous multinational companies.

Zug, Switzerland is a beautiful city and very popular among expats. 30 minutes south of Zurich, this low-tax region is home to numerous multinational companies. ...

Expats Talk about What it's Like Moving to Switzerland