No. I am married to an Ecuadorian woman, however, and we visited Ecuador on four different occasions before relocating, so I kind of knew what I was getting into.

I am learning Spanish rapidly. It's not that hard, especially since it is reinforced everywhere I go.

With Offices in BOTH Ecuador and the US, Ecuador Visas with Attorney Sara Chaca is the No. 1 Visa Law Firm for Your Move! Specializing in Ecuador Residency Visas plus converting from Temporary to Permanent Residency, Containers, Real Estate Closings, Wills and Estate Planning, Driver Licenses, Opening Businesses & Citizenship!

With Offices in BOTH Ecuador and the US, Ecuador Visas with Attorney Sara Chaca is the No. 1 Visa Law Firm for Your Move! Specializing in Ecuador Residency Visas plus converting from Temporary to Permanent Residency, Containers, Real Estate Closings, Wills and Estate Planning, Driver Licenses, Opening Businesses & Citizenship!

Massive. The family culture is suffocating - living with my in-laws felt like being rolled up inside a carpet. The constant prodding and pushing, the basic inability to give me space to do my reading - Ecuadorians as a group have no appreciation of the written word - just about drove me out of my mind. After three months in Quito, my wife and I escaped to Cuenca, which is a superior destination any way you measure it. Notably, after eight years in the US, she couldn't handle the family scene, either. Arriving with only the most rudimentary Spanish exacerbated the situation greatly. I felt like a sack of potatoes being trundled here and there with no clear idea of where I was going or what was going to happen to me upon arrival.

I very clearly went through each of the phases.

I was only occasionally homesick, usually when Ecuadorian cuisine would come up short, which it did regularly. The food here is unbelievably bland and Ecuadorians have no taste for sweets, so candy and anything sweet - like desserts - don't excite me much. It's an adjustment, but I have lost weight eating a non-American diet. It's funny, but I can get depressed all of a sudden when the differences between Ecuador and America surprise me at a vulnerable moment. For example, I know a decent steak cannot be purchased in a grocery store here (even the giant American style store that caters to gringos), but at just the right moment it can completely deflate my balloon to contemplate what a lousy selection of meat is offered here.

By the way, taxes on foreign goods are so high that drinking alcohol is out of the question - a 750 ml bottle of Jack Daniels costs $75! You've been warned.

The people are really sweet, especially if you try to speak Spanish. The cost of living is low, although not as low as various websites would have you believe. WATCH OUT! The amazingly tiny sums you can spend here require you to live like an Ecuadorian, so ask yourself when was the last time you considered a single chicken drumstick to constitute a dinner portion? And yes, rents are low - $300 or so, but trust me, you want to spend at least $600 per month until you get the lay of the land and maybe after that. What I appreciate the most about Cuenca is that I truly do not need to own a car. You would not believe how cool it is not to have a smoking monster sucking on my wallet. I can walk anywhere, which is a big part of why I have lost weight since arriving.

The family orientation means that newcomers are effectively shut out of local society. If you don't become fluent in Spanish and get involved in the local economy somehow, you will forever live in a gringo bubble.

Ecuadorians are short people - I would guess the average man is about 5'5", the woman 5'. It's just weird being so much taller than everyone around you - it can be a little creepy.

The streets are not safe - I'm not talking about crime here - I'm referring to the state of the sidewalks and curbs. YOU WILL HURT YOUR BACK AT SOME :POINT WHILE YOU ADJUST TO THIS REALITY. Not a day goes by that I do not encounter a situation presenting an unreasonable risk of personal injury that would not be allowed to persist in the US.

Ecuadorian businesses overtly discriminate on the basis of age and sex. It is jarring to see an ad for a professional accounting position that specifies the job is offered only to females under the age of 30. Now, I know many of the persons reading this are thinking that they have no intention of seeking a job in Ecuador, but they need to consider the type of mindset that this evidences and decide if they will be amenable to this attitude generally as it pervades all of Ecuadorian culture. You need to set your watch back 50 years to move here.

I am blessed with an Ecuadorian wife, so I have avoided most of this sort of thing. We have been married for six years, so I get it. One thing I would note for gringos is that in my experience, Ecuadorians lack a sense of humor - they don't tell jokes. They are some of the most literal people imaginable, so get ready for a blank stare if you have a funny story to share.

Ecuadorians prize conformity, even anonymity, above all. The best metaphor I can come up with for their society is of a prairie dog village. They never raise their voices or speak critically of each other. They criticize the government but never with any specific purpose or agenda - they just bitch gently about whatever. So do not speak your mind forcefully - I lost my temper visiting my wife's family in Quito and it was incomprehensible to them that I could raise my voice.

LEARN SPANISH before you arrive. If taking a few classes at your local junior college is too much of a burden or bother for you, then you are NOT a candidate for relocation. The next time you visit your physician, consider what your experience of medical care will look like conducted entirely in Spanish.

THINK VERY CAREFULLY about whether you can live without seeing your relatives in America. They are not going to fly to Ecuador to see you. You will have to go home to see them. Loneliness is the number one reason ex-pats go home. Get ready to be disappointed - things are DIFFERENT here in a million little ways that can bum you out seriously from time to time. And they are not just different, they are inferior. If you come here looking to reconstruct an American lifestyle on the cheap, you will be enraged, disappointed, depressed, and then you will go home.

Contribute
Help others in Ecuador by answering questions about the challenges and adventures of living in Ecuador. 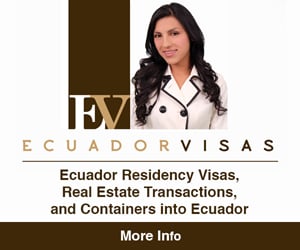