Summary: Important advice for expats and travelers in Dubai about how to dress appropriately, the Holy Month of Ramadan and other customs.

There is a lot of confusing and misleading information when it comes to what is and what is not culturally acceptable in Dubai. Dubai is a vibrant cosmopolitan city with over 100 nationalities living together in harmony. Millions of tourists flock to Dubai every year and the city is truly a cultural crossroads. The local population is quite small (estimated around 15%), but Emiratis in general are warm, welcoming, and very tolerant of foreign visitors and residents. In return, it is greatly appreciated if those who travel to Dubai take a little time to learn about the local customs and culture.

The UAE is a Muslim country. The culture is based on a deeply rooted belief in Islam and centers on the family. Mosques are dotted throughout the landscape of Dubai and five times a day the melodious prayer call or "adhan" will be heard. The official weekend is Friday, although government offices and certain multinational companies are also closed on Saturday. Arabic is the official language; however English is widely spoken by almost everyone and all the street signs are in both English and Arabic. There is no specific dress code in Dubai, and you will see both ends of the spectrum from women who cover themselves from head to toe to those who choose to barely cover themselves at all. At the beach, women are welcome to wear bikinis and men can don swimming shorts. Away from the beach, it is more culturally acceptable for men to avoid wearing shorts or going shirtless and for women to avoid mini-skirts, midriff baring tops, and shorts. T-shirts or blouses and mid-length skirts or Capri pants for women are considered quite appropriate. Muslim women from the Gulf States typically dress in a long black robe known as the "abaya". The "abaya" itself is not an Islamic requirement, but rather a cultural custom. Islam requires ladies to cover their heads and to wear long loose clothes covering their arms and legs. Gulf men wear a loose, typically white robe called a "dishdasha" along with a white or red checkered headdress known as the "gutra". The gutra is held in place with a black cord called an "agal".

Arabs are one of the most hospitable people in the world, but visitors still should take note of a few cultural musts when interacting with locals. It is best to ask permission of local women before taking their photograph and most likely you will be told "no". Visitors should also be aware that some Muslim women and men will avoid shaking hands with members of the opposite gender as per Islamic tradition. This should not be taken as an offense and it is simply best to wait and see if the other person extends their hand in greeting first. Local men will typically greet other local men by touching noses or kissing cheeks. Public displays of affection between members of the opposite sex are highly frowned upon, although you will see men (typically Asian expats) holding hands with other men when walking. This is a cultural norm and merely an expression of friendship. If you are invited to enjoy a coffee, tea or traditional meal with a local family there are a few guidelines to keep in mind. Before entering a home, shoes should be removed. When sitting, take care to avoid pointing the soles of your feet in anyone's direction as this is considered rude in Arab Muslim culture. Food and drink (and there will be a lot of it!) should be taken with one's right hand. Your hosts will most likely keep offering you more and more food and drink. It is acceptable to take a second helping but not necessarily a third or fourth! You will have to be persistent and it might take a bit of polite "back and forth" between you and your host before your host acknowledges that you are actually finished!

During the Holy Month of Ramadan (when Muslims fast from sunrise to sunset) non-Muslims in Dubai are also expected (by law) to refrain from eating, drinking or smoking in public during the daytime. A bit of discretion and respect for the host culture is really all that is called for. If a visitor accidentally makes a mistake and eats, drinks, or smokes in public, the worst that is likely to happen is that someone will gently remind you of the time of year and ask you to stop. Although most restaurants will be closed during the day (or offering take-away only), many malls now have food outlets that are screened off from the public and open during the day in Ramadan for non-Muslims. It is also perfectly acceptable for non-Muslims to eat and drink in the privacy of their homes or hotel rooms during the day. Most hotel restaurants will remain open (with screened-off areas) for hotel guests. It is greatly appreciated during Ramadan if women are a bit more conservative in their dress - simply avoiding short skirts or sleeveless tops. All live musical and dance performances are suspended during Ramadan, but pubs will open after sunset. In general, visitors do need to be more culturally sensitive during the Holy Month, but after the breaking of the fast each day the city comes alive and it is an ideal time to visit if you are looking to experience cultural flavor.

While Dubai is most famous for its shopping, visitors should take advantage of their trip to the United Arab Emirates to visit cultural heritage sites. The Dubai Museum, built in an old traditional fort, is a must-see for all ages and includes exhibits of weapons, national costumes, and displays of the desert as well as the pearl diving industry on which Dubai was originally founded. The Heritage and Diving Village features displays of Dubai's maritime past and includes quaint shops and restaurants. Finally, The Sheikh Mohammed Center for Cultural Understanding offers cultural awareness programs, as well as offering other activities including mosque tours and Arabic classes.

Ahmed Juma is a local UAE businessman and the owner of Emirates-Ads, a UAE classifieds site with extensive listings for UAE and Dubai jobs, properties, vehicles, and items for sale in the United Arab Emirates.

Contribute
Help other expats and newcomers by answering questions about the challenges and adventures of living in UAE.

Expats living in UAE talk about their own experiences with healthcare, hospital visits, emergencies, finding a doctor, buying health insurance in UAE and more.

7 Important Tips about Healthcare for Expats in the UAE

Expats and people moving to the UAE have lots of questions. Healthcare and health insurance are often on the list. Here are 7 tips about healthcare, health insurance in the UAE, having a baby in the ...

5 Tips for Living in Dubai

Expats in Dubai will find one of the largest expat hubs in the world. With so many other people from other cultures, it's a location where just about anyone can find a comfort zone with the right frame of mind and amount of effort.

Expats in Dubai will find one of the largest expat hubs in the world. With so many other people from other cultures, it's a location where just about anyone can find a comfort zone with the right fra...

Contribute
Help other expats and newcomers by answering questions about the challenges and adventures of living in UAE. 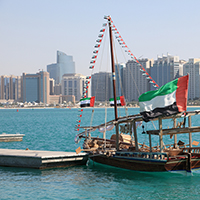 10 Tips for Living in Abu Dhabi

Expats in Abu Dhabi enjoy a unique lifestyle in the Middle East, but the requirements for moving there are very specific. Find out what these are and what it is like to live in this truly diverse city.